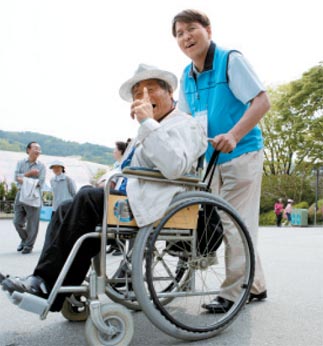 An employee of KOGAS helps a disabled man.

In 2004, Korea Gas Corporation declared its “First Year of Ethics Management,” and began holding classes to improve its corporate culture and relationships with clients. Four years later, on the 25th anniversary of its founding, the company declared a social contribution charter, and has since been fulfilling its role as a responsible corporate citizen.

One of its major local undertakings is the 2009 Blue Sky Project, which aims to improve air quality for the next generation. With Green Daejeon, KOGAS established the first Blue Sky Teenager program, which monitors air pollution rates in 100 areas of Daejeon and uses the research to establish regional environmental policy. KOGAS is also working to address unemployment among the young, and is taking part in the government’s job-sharing program.

Last June the company dedicated 900 million won ($794,000) - a portion of which was donated by its employees - to start the “Sharing the Love” project, which provides home help to disabled people. The program has attracted attention as a new type of welfare model that combines social work with economic help to improve the condition of the neglected social class.