[Sponsored Report] LG looks to a future in green development

[Sponsored Report] LG looks to a future in green development 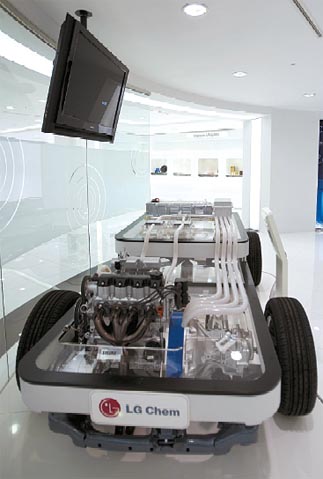 The economy may have taken a nosedive, but LG is not reducing its investment in developing new businesses. The company is looking to environmentally friendly green business to lead it into the future.

The company started its solar power plant business in 2005, and has since built 18 power plants in eight regions in Korea. In June, it completed the largest power plant in the country in Taean, South Chungcheong. The plant generates 19 gigawatts of electricity a year, which is enough to provide electricity to 8,000 of the 20,000 households in Taean for a year. Through solar power plants, the company can reduce up to 12,000 tons of carbon emissions.

Its subsidiaries LG Chem, LG Electronics and LG Solar Energy divide up the work of providing raw materials. LG Chem makes polysilicon and Siltron turns that into wafers. Then LG Electronics produces solar energy cells and modules using the wafers. LG CNS develops the plants and finally LG Solar Energy is in charge of building and running the power plants.

As for the LED business, LG works with LCD BLU and LED, and LG Innotek is producing LED modules for mobile phones, laptops and LCD televisions. LG Display uses the modules to create LCD panels and LG Electronics produces the televisions.

LG is planning to strengthen its LED business. Starting in the second half of this year, LG Innotek will invest 200 billion won ($176.6 million) to improve its LED production facility in Gwangju, and create the LED BLU and lighting LED package line in Paju by investing more than 1 trillion won by 2012.

In the electricity automobile battery business, LG Chem is rising as a globally-recognized company. Early this year, LG Chem will begin a six-year deal to provide batteries to GM after winning the bid to provide Lithium-ion polymer batteries for the Chevrolet Bolt, GM’s electric automobile, which is entering into mass production.

LG is also working to reduce greenhouse gases and is actively promoting the CDM business. LG has launched the “LG Climate Change Organization” to look for business opportunities in the carbon emission trade business.