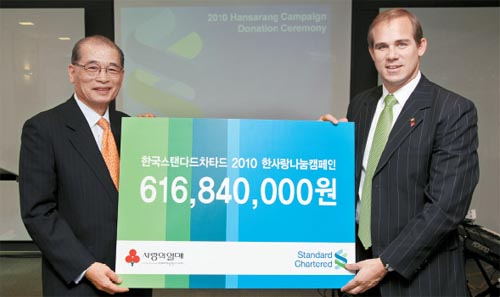 At a Hansarang Campaign donation ceremony, Richard Hill, president and CEO of SC First Bank donated money to the Community Chest of Korea.

Standard Chartered Korea Ltd. is pursuing sustainable growth by putting Standard Chartered First Bank up front for its charity work, and keeping that work going. Rather than offering one-off contributions, the company believes in providing ongoing support to needy people, and encourages its employees to take part in social organizations. With these strategies as its basis, the company is making steady strides in social and environmental conservation work - in other words, green growth.

Standard Chartered started doing business in Korea in 1882 and has established itself as a specialized knowledge system in the market. SC First Bank is the largest international investor in the Korean financial industry, with more than $4.5 billion.

Standard Chartered bridges the gap between local companies and foreign markets by using its global network.

The company is targeting low-carbon green development as its social cause, “Green Possibilities,” and has worked with its employees to devise plans to save energy and recycle. Believing that change is made from small things, employees routinely turn off electronic machines and computer monitors that are not in use, and use stairs rather than elevators whenever possible.

During the Earth Hour campaign last March, SC First Bank shut down electricity at its headquarters in Jongno District Gongpyeong-dong for an hour, and helps to promote reduced carbon emissions to guard against climate change.

Standard Chartered supports the World Wide Fund for Nature campaign, which demands that governments reach a plan at the December climate summit.

SC First Bank contributed 140 billion won ($123.5 million) to the Sinan Solar Power Plant, the largest solar power plant project in the world, completed in November 2008. At the same time, it established the Green Habitat program, which provides homes for the houseless.

The Hwaseong Habitat program helped 18 families to build new houses and stand on their own feet, with 300 employees from Standard Chartered taking part in the construction work from September to December 2009.

On World Environment Day, the company is carrying out a recycling campaign to collecting used papers. And in a first for a local bank, it introduced hybrid automobiles in all branches and in September 2009 started a pilot operation of 30 hybrid cars. The bank plans to change all its company cars to hybrids by 2012.

Standard Chartered was awarded the ArcelorMittal Boldness in Business Award by the Financial Times last month for its contributions to social work, and it has received high marks for its work in the fields of medicine and education. In 2009, SC First Bank received the Media Forum’s grand prize for contributions to Korea, and in 2007 it was recognized by the Ministry of Health and Welfare for its continuous growth.