[In-depth interview] Securing the rightful return of our relics

[In-depth interview] Securing the rightful return of our relics 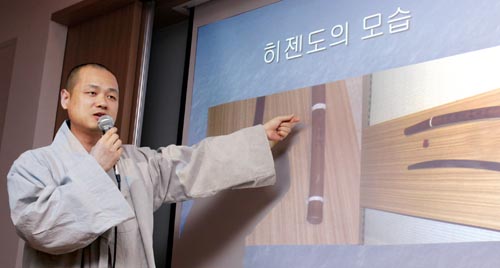 Hey Moon, a Buddhist monk at Bong Sun Temple in Namyang, Gyeonggi, is fighting for a worthy cause. The monk is working to have several ancient cultural properties, either stolen or looted from Korea, rightfully returned to their place of origin.

The JoongAng Ilbo exclusively reported on March 25 about Japanese possession of ancient Korean royal texts, which include volumes of “Uigwe,” “Jaesil” and “Gyeongyeon.” These Joseon-era (1392-1897) texts are being held at the Imperial Household Agency in Tokyo, Japan.

Hey Moon was the first in Korea to browse the Uigwe collection of royal protocols at the Imperial Household Agency in 2006. He subsequently organized a committee working to fight for the return of Uigwe to Korea.

The monk first started working to retrieve the 27 Buddhist relics belonging to Bong Sun Temple in 2003. He was instrumental in securing the return of the “Annals of the Joseon Dynasty” to the Mount Odae archives in Gangwon from the University of Tokyo in 2004.

Involved in several committees working to have ancient Korean cultural relics returned to their homeland, Hey Moon is directing all his energy into the return of the Uigwe texts from the Imperial Household Agency.

The JoongAng Ilbo met with the monk at Jogye Temple in central Seoul on March 24.

Q. Is there a particular reason you are focusing on the return of the ancient cultural relics?

A. Along with “Sillok” [The Annals of the Joseon Dynasty], Uigwe is considered the most significant of the Joseon period royal texts. While Sillok is solely text, Uigwe contains illustrations of royal ceremonies and protocols. That is why both are included on the Unesco Memory of the World list.

It’s wrong for the documents to be holed up in the Imperial Household Agency over 60 years after Korea’s liberation from Japan.

If the Japanese government is truly regretful of their past wrongdoings, they should make it their foremost agenda to have the royal texts returned to Korea.

Are the rare texts in the possession of the Imperial Household Agency the only copy?

Of the ancient royal texts in possession of the Imperial Household Agency, copies of some versions can be purchased in Insa-dong, central Seoul. The point of our effort is not the mere return of ancient texts but the return of the pride of our people and the spirit of the history recorded in them.

That is precisely the reason why we are placing significance on the Uigwe volume that depicts the state funeral of Empress Myeongseong.

Even during this tumultuous period, Emperor Gojong made an effort to emphasize the sovereignty of the Korean Empire [the empire that briefly succeeded the Joseon Dynasty]. On the cover of the volumes that depict the empress’s state funeral, the year 504 of Joseon is inscribed, indicating independence. By allowing the Japanese imperial family to possess the records of our last empress’s funeral procession, it’s as if they are being held in captivity.

You have also started efforts to return to Korea possession of the sword, “Hizendo,” used to murder Empress Myeongseong, correct?

To Katsuaki [one of the three people who attacked the empress] donated the sword to the Kushida shrine in Fukuoka, Japan. Inscribed on the sheath are the words, “A single swing killed the old fox.” In the document certifying the authenticity of the sword are the words “killed the empress with this sword.”

However, those involved in the murder were found innocent and acquitted of their charges and subsequently released from Hiroshima Prison in 1895 for lack of evidence.

The Kushida shrine is a so-called “ninja school.” We need to consider the significance of the storage of the sword in such a shrine.

Isn’t the effort to have the Hizendo brought to Korea also tied to the 100th anniversary of independence activist Ahn Jung-geun’s death?

The biggest reason why Ahn assassinated Hirobumi Ito [Japan’s first resident general of Korea from 1905-09] was his involvement in the murder of Empress Myeongseong.

The Hizendo is a hideous weapon that was used in the act of murder. It should have been confiscated by the Joseon Empire. While those involved in the murder were acquitted on lack of evidence, the words inscribed on the sheath have the accused admitting to their crime, so it should have been at least been in the custody of the Japanese prosecutors.

Our stance is that the shrine should take the courageous or honorable route and return the sword to Korea or destroy it themselves. Japan killed the empress of a nation and has kept the murder weapon and related records. Our drive is to have people realize the significance of Japan’s wrongdoing as we commemorate the 100th anniversary of Ahn’s death.

What do you think of the fact that since the JoongAng Ilbo reported on the ancient royal texts, politicians have stepped up to pledge their support toward securing their return?

What is the point of making such declarations? We have an opponent in this game. It’s important to focus on which of the cultural assets we can work to have returned to Korea.

What do you say to claims that Korea renounced its claims to such cultural properties by signing the 1965 Treaty on Basic Relations with Japan?

In 1965, South Korea renounced its claims to cultural properties by receiving 1,432 cultural assets from Japan - which included, according to my research, such trifles as straw shoes, an unofficial seal and a mailman’s hat. The Korean government renounced their rights to more crucial cultural properties.

Since North Korea still has the right to request the return of cultural assets, we reached an agreement in which the North would ask for the return of Uigwe on behalf of South Korea. Japan cannot refuse North Korea’s demand. But instead of being forced to return the ancient royal texts to North Korea, returning them by their own volition to South Korea in such a meaningful year would help to improve diplomatic relations.