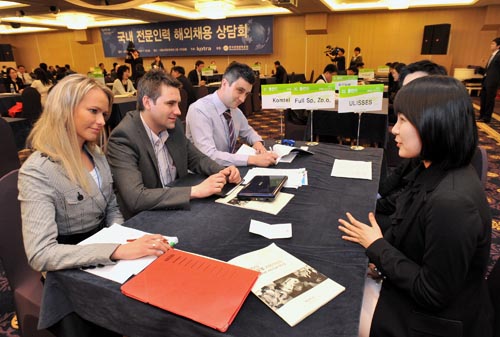 Personnel managers from Polish companies interview Korean applicants at the Global Job Fair in Yangjae, southern Seoul, yesterday. The fair, hosted by the Korea Trade-Investment Promotion Agency and Human Resources Development Service of Korea, is the first of its kind to arrange a meeting between Korean job seekers and foreign firms hoping to recruit Koreans to work at their headquarters. Provided by the Korea Trade-Investment Promotion Agency


Jenny Kwon, 27, once dreamt of being a diplomat simply because she yearned for a life overseas.

That position was too difficult to get. Instead, the business major from a Seoul college chose a marketing job at a large local shipbuilding firm, attracted to its promise to offer her an overseas stint after working eight years in Korea.

She has completed just half.

“I need to work as many years more and that seems too far away,” said Kwon, shaking her head.

So yesterday, she took a day off to be at a rare type of job fair in Seoul, where she believed her passion would be realized immediately.

Kwon was one of the 334 Korean applicants at the Global Job Fair in Yangje, southern Seoul.

At the one-day event, personnel managers from 51 foreign companies based in 17 overseas countries interviewed hopefuls face-to-face or via videoconference equipment set up in the venue.

According to hosts Korea Trade-Investment Promotion Agency and Human Resources Development Service of Korea, this was the first job fair in Korea to match local job seekers with foreign firms hoping to recruit Koreans to work at their headquarters.

“Having Korean employees on board will give us big advantage, because Korean people are known worldwide for being good hard workers,” Mandera said during a break between interviews.

Hendrik Steffen, an official at German manufacturer ContiTech, said Koreans are less recognized by global job recruiters than Chinese and Japanese, because the country is small.

Min Young-soo, or Roger Min as he is called in Canada, was another interviewer from overseas. The Korean-Canadian, the creator and CEO of Dot Line Design, a clothes and fashion item maker in Canada, said he needs more Koreans to help expand his company because they are diligent and passionate.

The trade agency said around 130 of the applicants would be hired.

Yet small as that number may sound, Choi Yoon-gyu, the deputy director who was in charge of the fair, said it has significance for Korean job seekers.

“The local job market is still slumping, but we want Koreans to look beyond it and notice the vast job market overseas,” Choi said.

The agency said it aims to help 5,000 Koreans get overseas jobs through more of these events by 2012.