No luck in frantic rescue efforts

No luck in frantic rescue efforts 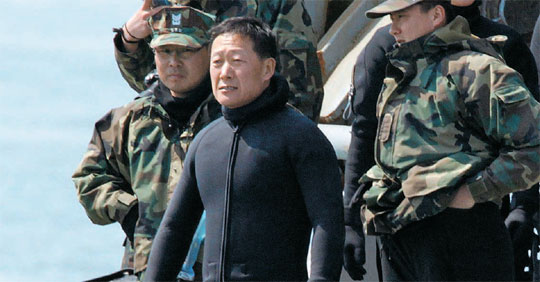 The Lee Myung-bak administration frantically tried yesterday to ease national disquiet over the mysterious sinking of a Navy patrol combat boat, with the president visiting the search site and the government releasing military video recordings of Friday night’s incident.

Four days after the unexplained sinking of the 1,200-ton Cheonan, rescue divers continued their mission in the Yellow Sea near Baengnyeong Island searching for 46 missing sailors. While no news about survivors was reported by last evening, one member of the rescue team died during the mission. A 53-year-old warrant officer passed out underwater around 3:20 p.m. He was sent to the U.S. ship Salvo, but died during medical treatment, the military said.

As public frustration mounted over the lack of an explanation for the accident, the Blue House took the matters into its own hands. President Lee yesterday visited the site, which is located within the range of North Korea’s coastal artillery, to check on the rescue operation and meet with missing sailors’ families.

“Baengnyeong Island is only about 13.1 kilometers [8.1 miles] away from the North’s Jangsan Cape, where ground-to-ship guided missiles and coastal artilleries are heavily deployed,” Blue House spokesman Park Sun-kyoo said, adding that no president has ever visited there because of the risk involved.

Located 191.4 kilometers northwest of Incheon, the island is South Korea’s northernmost island in the Yellow Sea. 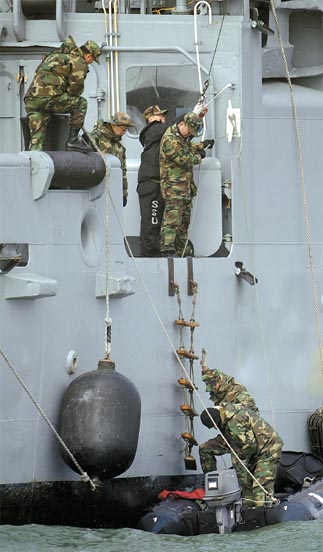 Park said Air Force fighter jets patrolled to ensure the president’s safety, adding that Lee decided on his trip to express the seriousness of the situation. “Lee’s visit should not be interpreted as a publicity stunt,” Park said. “The president was revealing his heartbroken feeling toward the missing soldiers.”

At the order of the Blue House, the Ministry of National Defense also released a video clip of the incident. In a media briefing yesterday afternoon, the ministry released an 80-second clip taken shortly after the unexplained explosion tore the Cheonan in half Friday night.

The ministry said the marines’ recording was about 40 minutes long, and an edited version was released to the media.

The 80-second footage was blurry, showing only the outline of the ship. In the image time-stamped at 9:33 p.m., the stern was not visible, while the bow remained identifiable. Another image at 9:56 p.m. captured a speed boat approaching the sinking ship.

“When the TOD began recording, the stern was already invisible because it had gone underwater,” said Won Tae-jae, Defense Ministry spokesman.

Earlier yesterday, the military refused to make the footage public, fueling speculation about the cause of the sinking, and Blue House spokesman Park said there was no reason to hide the clip. After Park said the record would be released unless it contained a very special security concern, the ministry released the edited clip.

“Questions have arisen that the government was hiding something, and the president has made it clear there should never be any doubt,” Park said, urging the media to refrain from speculating about the cause of the incident.

The military yesterday also tried to explain the difficulties of the underwater operation.

Song explained that the currents where the divers were working flow at four knots (two meters per second, 6.6 feet per second), explaining that the currents “will give them the feeling of standing alone on the rooftop of a building amidst a typhoon.”

He said that gaining entry to the inside of the submerged stern, where most of the missing sailors were located at the time of the explosion, is a risky task for even veteran divers as visibility is only 30 centimeters (1 foot) with flashlights.

“They also need atmospheric diving suits, including helmets, for the operation, but it takes three to four days to get ready,” Song said. “Rescue divers are now working with scuba diving gear in violation of safety protocols.”

Poor equipment was also cited as the reason for the rescue diver’s death yesterday. “He collapsed due to high pressure and eventually died,” a military source told Yonhap News.

While the rescue efforts continued, military specialists said it was unlikely the sailors remained alive inside the submerged ship, even if the compartments were sealed after the explosion. “A 1,200-ton ship was ripped in half, so imagine the impact,” said a former member of the Navy’s Ship Salvage Unit. “I would assume that they have suffered serious internal and external injuries from the shock wave.”

A retired vice admiral agreed. “Even if they managed to seal the compartments, the water pressure could destroy doors as the ship sank,” he said.

Although the cause of the sinking is undetermined, the government has ruled out the possibility of an internal explosion for now. President Lee was briefed by Navy Chief of Staff Kim Sung-chan yesterday.

At a cabinet meeting in the morning, President Lee also ordered the military be on full alert toward North Korea. “Since the sinking took place at the front line, the military should thoroughly prepare for any move by North Korea,’’ Lee was quoted as saying by Park. “I want the military to maintain its complete readiness.’’

The Blue House later explained that Lee was not drawing a connection between the sinking and North Korea.