Manchester goes down 1-2 in first quarterfinal

Manchester goes down 1-2 in first quarterfinal 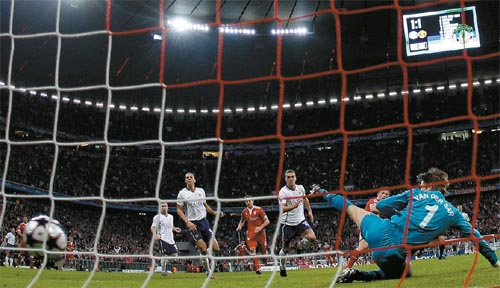 With left winger Park Ji-sung substituted out of the lineup, the team went down 1-2 in the final eight minutes of the match against Bayern Munich at the Allianz Arena in Munich yesterday (Korean time).

With his team ahead, United manager Alex Ferguson substituted Dimitar Barbatov and Luis Antonio Valencia for Park and Michael Carrick.

But weaknesses opened up in the midfield without Park and Carrick, and the momentum shifted to Bayern.

“Park Ji-sung and Luis Nani did a good job pressuring Bayern Munich. The decision to take Park out of the lineup and change the team strategy was the determining factor in the loss,” said Spanish TVE1 broadcast analyst Jose Manuel Diaz.

Park, who has been playing well of late, did not start in the center midfield position as expected, but in his usual left winger post. Instead of coming out on the attack, he was assigned to contain Bayern Munich right fullback Philipp Lahm.

Park provided quick passing in the game, and kept his up-tempo style going off the field.

“It’s not over. We’re working hard at winning at Old Trafford [in the second-leg]. If we win at home, we’ll go on to the semifinals,” he said in a post-match interview.

“It hurts that we let in goals in the final minutes of the game, but we played well defensively. Our timing was just a little off today.”

Yesterday’s results in Munich flipped the “Miracle of Camp Nou” at the UEFA finals 11 years ago. Manchester trailed Munich 1-0 for most of that game, but pulled out in spectacular fashion with two goals in the final two minutes of regulation play.

The cards were reversed this time around, as Munich’s Frank Ribbery booted in a free kick in the 77th minute. The Frenchman’s kick from an area just outside the left side of the box deflected off Rooney and found the back of the net.

Then Munich forward Mario Gomez was taken down in the right side of the penalty box, but Ivica Olic of Croatia gained possession and calmly placed a left-footed shot in the net.

Manchester tried to fight back, with defender Nemanja Vidic connecting on a header in the 83rd minute, but the ball hit the goalpost, and Bayern took the win.

With the loss, Manchester United’s nine-game unbeaten streak of eight wins and one tie came to an end.

The second leg of the quarterfinals against Bayern Munich will take place at Old Trafford in Manchester, England, on April 8, but Munich will have to do without its star player. Rooney injured his ankle in the play in which Olic scored. Ferguson said the injury is not serious, but the team hasn’t revealed whether Rooney will be available for the upcoming matches.

In the other quarterfinals match between French clubs Olympique Lyon and Bordeuax, Lyon won the first leg 3-1.