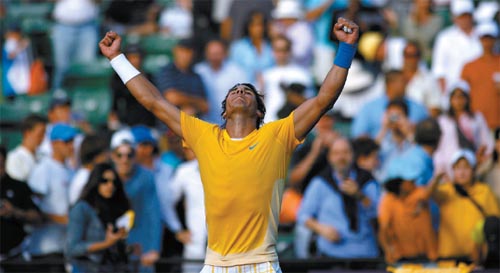 
MIAMI - World No. 8 Andy Roddick needed to overcome a sluggish start to book his ticket to the quarterfinals at the Sony Ericsson Open on Tuesday, while Rafael Nadal also advanced after being tested early in his match.

It was downhill from there for the unseeded Becker as Roddick won the tiebreaker 7-4 before easing through the second set.

“He came out aggressive and ready to play from the first ball,” Roddick, who limited his unforced errors to 15, told reporters. “I was maybe looking to work my way into the match a little bit more than he afforded me.”

Roddick will face Spain’s Nicolas Almagro in Wednesday’s quarterfinal and, with a victory, could possibly face Nadal in the semifinals.

World No. 4 Nadal held off Ferrer in just under two hours as the two Spaniards gave the crowd a stirring match. The two went back and forth in a first set that started with Nadal leading 2-1, and finished with Ferrer losing 7-5 in the tiebreaker.

Nadal squandered a 3-0 lead in the second set before breaking Ferrer in the final game for the match. He is now 9-3against his friend with four straight victories.

“It was a match of highs and lows,” Nadal told reporters. “I started the second set well then played the next three games poorly, but I accepted it and kept working and waiting for my opportunity.”

On the women’s side, Venus Williams won her 14th successive match after beating Poland’s Agnieszka Radwanska.