[Sponsored Report] Like a picnic at the Proms - except in Seoul

[Sponsored Report] Like a picnic at the Proms - except in Seoul 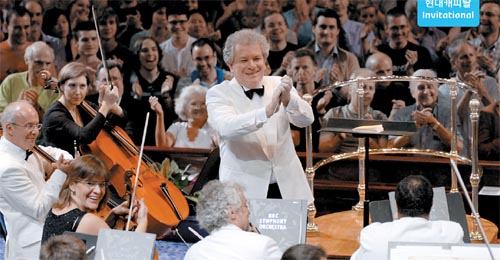 The BBC Symphony Orchestra, conducted by Jiri Belohlavek, center above, will perform in May at Olympic Park and at the Seoul Arts Center.

The BBC Symphony Orchestra is coming to Korea on May 15 and 16 to perform at Olympic Park and the Seoul Arts Center, at the invitation of Hyundai Capital. Events in sports such as cycling and gymnastics have found a home in the Hyundai Capital Invitational series since 2007, to audience acclaim. Cultural performances are new to the series this year.

The studio orchestra of the British national broadcaster has anchored the BBC “Proms” festival for years, with famed conductors bringing the British sound to the world.

The Seoul concerts will be led by Jiri Belohlavek of the Czech Republic, who was named chief conductor of the orchestra in July 2006. In September 2008 they recorded an album of Janacek that received the best opera recording award from Gramophone magazine.

The two shows will offer different themes. The first will start at 7 p.m. on May 15 at Olympic Park and will include the highlights of the eight weeks of The Proms in a festive outdoor picnic atmosphere. Piano prodigy Jiyong will join the orchestra. Ticket prices range from 10,000 won for picnic seating to 90,000 won for a family box. The tickets are priced to encourage those who might not otherwise come to see classical music to take part.

On May 16 at 8 p.m., a more traditional concert will be held at the Seoul Arts Center. The charming violinist Kim Ji-yeon will perform Sibelius’ Violin Concerto in D minor. Ticket costs are from 50,000 won to 200,000 won.

An executive at Hyundai Capital said, “Through the Hyundai Capital Invitational BBC Symphony Orchestra Park Concert we plan to present a new type of performance culture where families can enjoy classical music and a picnic outdoors.