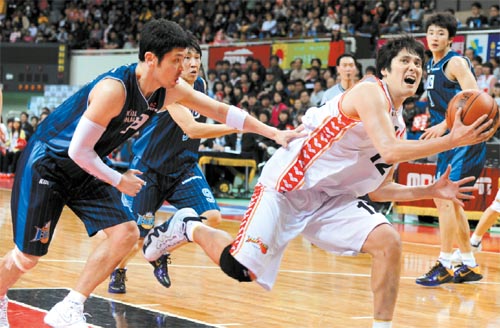 Ham Ji-hoon of Mobis gets past KCC defenders in the KBL finals game one on Wednesday night in Ulsan. [NEWSIS]

The Mobis Phoebus treated the home crowd to an impressive come-from-behind win in game one of the Korean Basketball League finals Wednesday night in Ulsan.

With KCC Egis ahead for the majority of the game, even leading 72-60 after the first three quarters, Mobis surged forward to a 91-86 victory.

The regular season’s Most Valuable Player, Ham Ji-hoon, proved to be too much for the Egis, which was once again without its center, Ha Seung-jin. Ham was effective throughout the game but was especially dominant in the crucial fourth quarter.

With the game on the line, Ham’s signature turnaround jump carried the team with 12 points and four rebounds in the final quarter of play. The third-year forward scored a total of 26 points and added eight rebounds and five assists in 38 minutes.

With Ha still a question for game two, KCC will have to find an answer to Ham. KCC did a respectable job of containing the big men in the first half, but Kang Eun-sik, Choi Sung-keun and Terrence Leather all had foul trouble by the fourth quarter and couldn’t stop Ham’s offense.

“Our players focused on playing defense until the third quarter, but we were tired by the time we reached the fourth,” KCC head coach Hur Jae said in a post-match interview. “If Ha does return, we can effectively defend Ham, but without him it’s difficult to contain Ham one-to-one.”

While Mobis won the battle in the low post, KCC was the stronger team in the backcourt. Jeon Tae-pung scored 14 points and four assists but he came up with only one basket and no assists in the final quarter.

Mobis head coach Yoo Jae-hak had said before the series started that he would not strain his team by attempting to stop Jeon, but would rather try to contain the talented point guard.

He put Yang Dong-geun up to the task in the game’s second half, and the plan worked. Jeon had a tough time getting off three-point shots and effective passes to his teammates.

Despite his team’s impressive effort in the final quarter and the outcome of the game, Yoo was less than impressed with his team’s effort.

“This is our worst defensive game this entire season. We will have to work on improving our defense for game two,” he said.

With game two tomorrow at 3 p.m. in Ulsan, KCC will have to find a way to free up Jeon if it is to have any chance of winning a game before the series shifts to Jeonju, North Jeolla, on Monday.