[Viewpoiont] Give us back the nukes

[Viewpoiont] Give us back the nukes 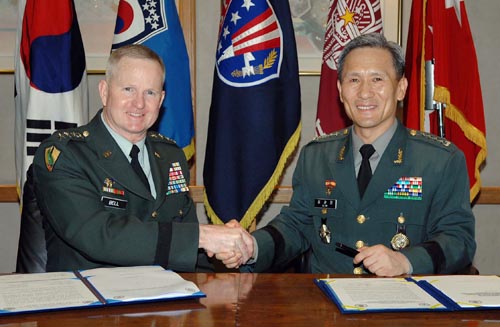 The country is in a state of shock and confusion following the baffling sinking of a warship in waters near the maritime border with North Korea. The government must address the matter with conviction and take necessary measures according to the country’s stature and interests upon unraveling the exact cause of the sudden explosion on the 1,200-ton Cheonan warship last Friday night.

The repercussions of the accident will likely be great regardless of North Korea’s involvement. It will undoubtedly raise questions about our military’s combat competence and power balance in the Army, Navy and Air Force. At the same time, it could reignite debate on the transfer of wartime operational control from the United States planned for April 17, 2012.

Many in our society have been arguing that the two allies should push back the timing of the command handover process. They cite the heightening security threats by North Korea with its nuclear and missile program and say that our military is yet unprepared to take the leading role in military operations. The sinking of the Cheonan warship and the military’s slack reaction to the emergency are likely to back up their argument.

The international community has tried almost everything in the diplomacy book - two-way dialogue between South and North Korea and separately between North Korea and the U.S. as well as a multilateral platform among four and six countries - to try to dismantle North Korea’s nuclear campaign for the last two decades but to no avail.

Simply put, we have reached the moment when it may be too naive to expect the North Korean regime that has detonated two nuclear devices already to voluntarily give up its nuclear program. Some extreme measures may have to be considered now.

Still, there is no turning back on the transfer of wartime command, which was agreed to by the two states. But delaying the process can be an alternative as South Korea could take up the new military responsibility after the North Korean nuclear threat is resolved and the security environment on the peninsula improves. It is no doubt a reasonable solution, but it comes with a heavy price; the United States, in return, could demand South Korea to pay for the cost of stationing its forces. We must seriously examine if the command status quo is worth that price.

That’s why we need a completely new mind-set and a strategic breakthrough to attain denuclearization and security enhancement simultaneously on the peninsula. Reconsideration and delay of the wartime control transfer are not the only options.

We can consider a third way.

For example, we can demand that the United States redeploy some of the tactical nuclear weapons President George H.W. Bush ordered removed as a part of the Strategic Arms Reduction Treaty with the Soviet Union in 1991.

The timing could also correspond with the April 2012 command transfer as we can continue with diplomatic efforts to disarm North Korea while preparing for the redeployment of those weapons in South Korea. Of course, we can call off their deployment if our nuclear talks with North Korea reach a satisfactory settlement. But if talks fail, we can keep the arms at least until North Korea fully dismantles its nuclear weapons. In other words, instead of bickering over command control transfer, we can utilize some U.S. tactical nuclear weapons to address North Korea’s nuclear threats through the joint South Korea-U.S. nuclear deterrence strategy.

Such a policy could translate into a temporary setback for the Obama administration seeking a nuclear-free world and the Korean government campaigning for denuclearization of the Korean Peninsula. Still, South Korea can quiet the international community’s worries about its own nuclear development to counter North Korea’s threat through use of U.S. tactical arms.

The logic behind the idea is that we must come up with a practical alternative, a Plan C, to address North Korea’s security threats, which are hindering progress in talks.

The plan would provide a strong backup for a weakened defense and deterrence after the command transfer, as nuclear deterrence can be the strongest option. It could also pressure North Korea to accelerate its denuclearization. It would also be in accordance with the U.S. commitment to a nuclear umbrella over the peninsula pledged in Korea-U.S. summit talks in June 2009 and provide room for South Korea’s role in nuclear arms reduction talks between North Korea and the U.S.

At the same time, the plan could keep China on its toes and inspire it to play a more active role in the six-party talks than lukewarm mediator. North Korea has sharply augmented its nuclear capabilities since the start of the talks.

Last but not least, nuclear arms in the South could ameliorate inter-Korean relations as Seoul could free itself from Pyongyang’s nuclear threat and then pursue more economic ties.

We must set the stage right.

*The writer is a senior research fellow at the Korea Institute for National Unification.
Translation by the JoongAng Daily staff.