To avert disaster, start at the source

To avert disaster, start at the source 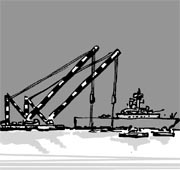 On Sept. 8, 2008, Tashan Mine in Shanxi Province, China collapsed with a thunderous sound. Many miners were buried alive, and the entire village was covered with a mountain of waste iron ore. A total of 272 people lost their lives. The central government was astonished by the news, and a thorough investigation was ordered. They found that it was “a simple accident caused by worn-out facilities.”

But the falsehood of the investigation was revealed when an old woman who had lost her son appealed for re-examination. The Public Security Office of Shanxi Province reported the case, and the National Audit Office reviewed the case. When the truth was revealed at last, the whole of China was in shock.

A vast network of bribes connected the former deputy mayor, deputy assistant to the mayor and former deputy director of the Public Security Bureau of the city where the mine had been located with the former secretary of the county and even more officials.

The local officials had taken payments in return for overlooking wrongdoings such as human rights abuses and illegal mining activities. The total of the bribes was astounding, especially considering that the daily wage of mine workers was only 25 yuan ($3.60) and that many of them were slave laborers who were not paid at all. The collapse of Tashan Mine was not an accident: It was a man-made disaster and a crime, to be precise.

At present, southwestern China is like a desert because of prolonged drought. Some 60 million people in Yunnan, Guizhou, Sichuan, Gansu and Shanxi provinces are wandering around in search of water. People lacking drinking water total 18 million while some 12 million cattle have perished from thirst. Farmers have given up cultivation of 11,000 square kilometers (2.7 million acres) of arable land.

But the State Council in 2006 released 1.9 billion yuan to 103 counties in the southwest for installation of potable water supply systems. The National Audit Office has launched an investigation and found that 450 million yuan disappeared into thin air.

In the end, the drought has been proven a natural disaster, but exacerbated by the wrongdoings of human beings.

Here in Korea, the whole nation is in mourning due to the sinking of a Navy patrol ship. It is frustrating that we still do not know the cause of the accident. But one thing is clear: Human error plays a part in all large-scale accidents.

If the ship sank due to an enemy attack, then the sailors were certainly negligent in their vigilance. If it was an internal accident, violation of military rules is suspected.

Such disarray in the handling of an accident is in itself a man-made disaster. To prevent this in the future, we should strengthen our discipline and come up with effective guidelines for handling accidents.