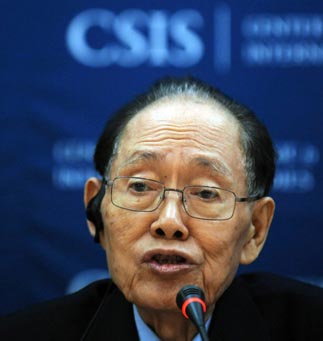 North Korean defector Hwang Jang-yop, speaks during an on-the-record roundtable discussion hosted by the Center for Strategic and International Studies on Wednesday in Washington, D.C. [AFP/YONHAP]

WASHINGTON - North Korea will not collapse despite international sanctions unless China ends its support for its communist neighbor, a former senior North Korean official said Wednesday.

“China is the lifeline of North Korea,” Hwang Jang-yop said at a forum at the Center for Strategic and International Studies. “If China ever broke with North Korea, it would be the death knell for the regime.”

While the Barack Obama administration is advocating “strategic patience” and continued sanctions to force the impoverished communist nation to return to the six-party talks on its denuclearization, Hwang urged a different approach.

“The solution is ideological warfare. We need to focus on the people of North Korea and alert them to the human-rights abuses that are taking place,” he said. “We don’t need to use force. We need to use ideology and markets and diplomacy.”

The former secretary of the ruling Workers’ Party and the highest-ranking North Korean official to defect to South Korea arrived here Tuesday for his second visit since 2003, when he appeared at a congressional hearing to denounce North Korea’s nuclear ambitions and poor human-rights conditions. Pyongyang called him “human scum” after the first visit.

The 87-year-old Hwang, the author of North Korea’s juche, or self-reliance ideology, will meet with scholars, congressional leaders and human-rights activists here until later this week, when he flies to Tokyo on his way home, informed sources said.

Hwang proposed that the United States persuade China - Pyongyang’s main economic and political supporter - to put pressure on the North so that the reclusive state will pursue a market economy. “Pressuring North Korea to adopt the kind of openness policy being pursued by China suits the interests of China and the U.S.,” he said.

He dismissed the notion that China has territorial ambitions on North Korea.

“China’s interest is in preventing North Korea from becoming a liberal democracy,” which could cause unrest among more than 800,000 ethnic Koreans along the border with North Korea, he said. “China’s biggest interest lies in maintaining consolidation of the country with 1.3 billion people.”