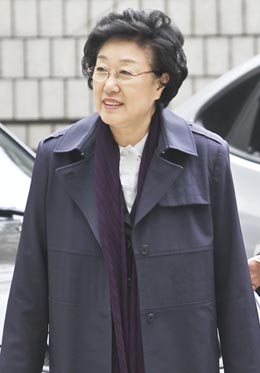 An intense quarrel broke out during former Prime Minister Han Myeong-sook’s trial on bribery charges, as prosecutors argued fiercely that they should not be required to hand in their questions to judges and opposing counsel before they put Han on the stand.

Yesterday the prosecutors lost that battle, which began after Han, who has been charged with accepting $50,000 from a local businessman while she was in office, exercised her right to remain silent and refused to speak to prosecutors.

“From now on I will not answer prosecutor’s questions,” Han said Wednesday during her trial at Seoul Central District Court. “I was branded a criminal because the prosecution’s accusations against me were disclosed to the public before I was indicted.”

Prosecutors yesterday reluctantly gave in to the compromise, but Han still refused to answer their questions, even if put to her by the judges.

“I was originally going to lay bare the truth in court, but I’ve changed my mind,” she said. “I reject the prosecution’s questioning because their attitude hasn’t changed.”

Judge Kim Hyeong-du, who presided over Wednesday’s trial, accepted Han’s request to stand silent and ruled that the trial would proceed without prosecutors’ questioning time. Kwon Oh-seong, the Seoul Central District Prosecutors’ Office senior prosecutor in charge of the case, fought the decision, arguing that “prosecutors’ right to question the defendant should also be respected.” He demanded that Han hear the prosecution’s questions before she decided whether to answer.

“The trial’s only fair when the time for prosecution and defense is equal. The prosecution can’t accept the court’s decision to give only Han’s attorney a chance to ask questions of the defendant,” Kwon said.

But Han’s attorney backed the court’s decision, saying the prosecutors’ question time was moot if Han would not answer their questions.

The court took the arguments under advisement on Wednesday and recessed until yesterday afternoon, when the thorny compromise was reached. Judge Kim said that Han may only be asked questions approved by her attorney.

The court said the measure is meant to ensure that Han does not face insulting questions from prosecutors after exercising her right to remain silent.

Han was a symbol of integrity when she served as prime minister from April 2006 to March 2007 during the Roh Moo-hyun administration. She was charged in December with allegedly accepting a bribe from Kwak Young-wook, the former CEO of Korea Express, in return for helping him win a job.

Prosecutors said Han received the money from Kwak during a luncheon at the prime minister’s residence on Dec. 20, 2006.

Kwak, who told prosecutors last year that he personally gave Han $50,000 in the two envelopes, changed his testimony when he took the witness stand on March 11.

He then said that he “left the envelopes on a chair in the dining room after the luncheon.”