No subs near Cheonan: Ministry

No subs near Cheonan: Ministry 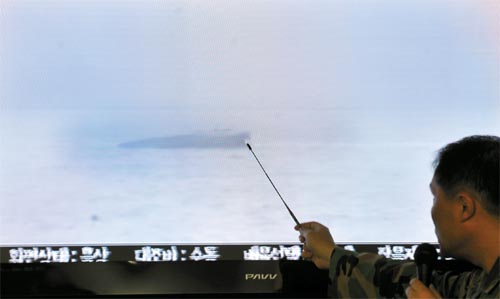 Col. Lee Young-gi, a senior defense officer under the Joint Chiefs of Staff, plays for reporters recorded footage of a thermal observation device showing a front part of the sunken Navy ship yesterday at the Defense Ministry in Yongsan, central Seoul. The thermal observation device is a type of night-vision used by the military. Lee said the clip was recorded from Baengnyeong Island, Korea’s northernmost island in the Yellow Sea. [NEWSIS]


The Defense Ministry in Seoul said yesterday it didn’t detect any North Korean submarines near the inter-Korean maritime border in the Yellow Sea on Friday night, when the South Korean Navy vessel Cheonan sank after an unexplained explosion.

“We closely watched the movement of the North’s vessels, including submarines and semi-submersibles, at the time of the sinking,” said Commodore Lee Gi-sik, chief of information operations under the Joint Chiefs of Staff in Seoul, during a media briefing. “But [the South’s] military did not detect any North Korean submarines near the countries’ western sea border.” The ministry did not comment directly on semi-submersible activity in the area at the time.

The 1,200-ton navy corvette Cheonan sank after an explosion tore it apart near the tense border, sparking initial suspicions of a torpedo attack by the North. Among the 104 crew on board, 58, including the captain, were rescued, while 46 remain missing and prospects for their survival are dim.

At yesterday’s media briefing, the ministry tried to satisfy public puzzlement six days after the still-unexplained tragedy by showing a video clip recorded by a thermal observation device showing the front section of the ship after the explosion but before it sank, and corrected earlier estimates of the time of the explosion or accident. It refused to make public radio communication records between the Cheonan and the Second Naval Fleet based in Pyeongtaek, Gyeonggi, at the time of sinking on security grounds. It also gave new information on a second ship’s firing of 76-millimeter guns northward after the explosion.

The South Korean Navy corvette Sokcho, which was on a patrol mission near the Cheonan, fired at an object it assumed to be a North Korean vessel, said the ministry. At 10:56 p.m., the Sokcho detected on radar an “unidentified object” flying northward at a fast speed of 42 knots (70 feet per second) from northern Baengnyeong Island, Korea’s northernmost island in the Yellow Sea.

The Sokcho opened fire at the object and the Pyeongtaek fleet, authorized the attack, the ministry said.

The object, which was about 9.3 kilometers (5.8 miles) away from the Sokcho, split and came together again twice, and did not show any ripples, which are usually made when warships are speeding forward, the ministry said. The target was later identified as a flock of birds after analyzing radar data. 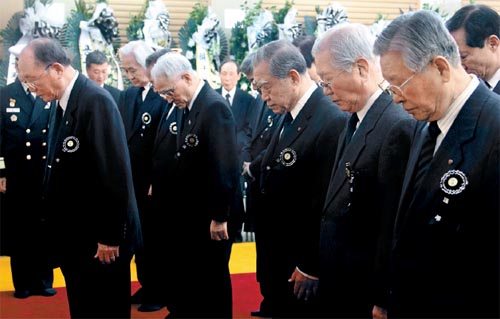 At the briefing, the ministry said it had altered its estimate of the time of the unexplained blast to 9:22 p.m., 23 minutes earlier than the time announced the night of the sinking, said Col. Lee Young-gi, a senior defense official at the Joint Chiefs of Staff.

The colonel, who showed the clip recorded by the thermal observation device, said the military adjusted the time of the explosion after learning that the Korea Institute of Geoscience and Mineral Resources detected a seismic wave of 1.4 to 1.5 magnitude underwater at 9:21:58 p.m., when the Cheonan was presumed to have sunk.

The ministry also moved up the time of the first report on the incident from the Cheonan to the Pyeongtaek fleet four minutes earlier than an initial estimate of 9:30 p.m.

“Even though 1.4 to 1.5 magnitude is equivalent to a degree of explosion of 170 to 180 kilograms (374 to 396 pounds) of TNT, there was only one signal we detected so we are not sure whether the blast was caused by a collision of two vessels or an explosion,” said Lee Hui-il, a scholar at the Korea Institute of Geoscience and Mineral Resources.