The legendary style of Andre Kim

The legendary style of Andre Kim 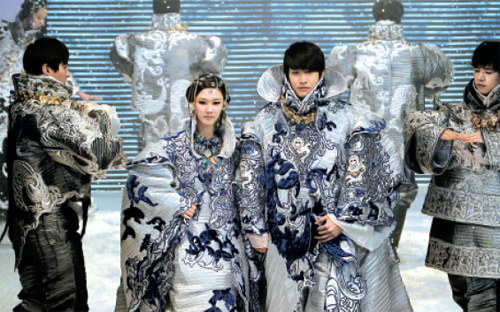 Since his first fashion show in 1962, Andre Kim’s designs have expressed an unchanging interest in Oriental mysticism, but he has since updated his style with Western flourishes. Actors Jung Gyu-woon and Lee Soo-kyung walk the catwalk during the designer’s show in Beijing at the end of last month.

BEIJING - It was a feast of colors built on his signature designs - glamorous, voluminous dresses and suits highlighted by flashes of golden embroidery. What was new this time around was the designer’s “modern interpretation of old China,” represented by a line of bright crimson evening gowns and suits.

Celebrated Korean designer Andre Kim presented his 2011 spring/summer collection in Beijing earlier this week. The show was held to commemorate Preview in China 2010, a major fashion event that ran from March 28 to 31 at the Beijing New China International Exhibition Center. 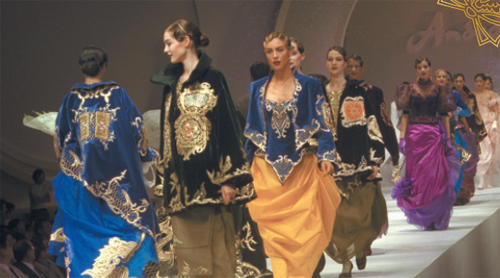 Kim showed his latest designs at the Seoul International Fashion Collection in 1997.

Preview in China 2010 is a large Korean pavilion set up for the China International Clothing & Accessories Fair. It is a spin-off of the Preview in Shanghai event that has been held in that city for the last seven years and has helped Korean fashion companies establish themselves in the southern part of China.

At the show, Kim unveiled 144 pieces from his new collection on six stages with the themes “Beijing World Festival for 2011,” “Legend of China,” “Great Romance of Byzantium,” “Immortal Art of the Renaissance,” “Fantasia of Korean Ancient Kingdom” and “My Unforgettable, Everlasting Love,” the last of which featured the designer’s trademark closing scene with a pair of lovers decked out in wedding garb. 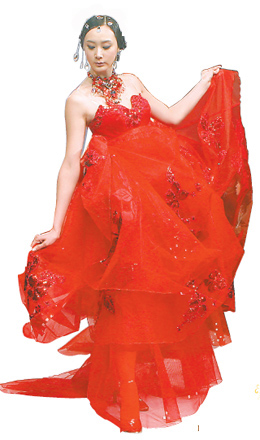 A model wearing a deep-red evening gown, which represents the designer’s “modern interpretation of old China,” poses during the show. [YONHAP]

“China has a long history and a great culture related to its legacy of royal families and I tried to express that in the show,” the designer told the press after the show.

Kim said he first visited China in 1993, when he was invited to present a show commemorating the first anniversary of the establishment of diplomatic ties between Korea and China in 1992. Since then, he has returned to the country about a dozen times to hold fashion shows in cities such as Beijing, Shanghai and Qingdao.

“I have watched the remarkable development of the Chinese fashion industry over the past years and I have no doubt that the industry will progress even more in the coming years,” Kim said. “It is also interesting to note that the Chinese government is taking the initiative in advancing the country’s fashion industry.”

As usual with Kim’s shows, star actors were featured in the runway shows. Actress Lee Soo-kyung and actor Jung Gyu-woon, who starred as a couple in the hit TV drama “Love You 10 Million Times,” which ended early last month, strutted down the catwalk in a number of Kim’s creations.

They added a bit of drama to the designer’s trademark final love scene in which the actor kisses the actress on the forehead.

“This show was not much different from his previous shows, but it was still beautiful and magnificent,” said Peig Yang, 35, a member of the fashion industry who introduced herself as a huge fan who has seen many of Kim’s shows over the years. She was also one of more than 100 Chinese spectators who attended the show on Monday.

Meanwhile, Kim, who has presented shows at spectacular venues such as Angkor Wat in Cambodia and the Giza pyramids in Egypt, revealed that it is his dream to show his fashion art pieces at an ancient Beijing venue.

“I hope to hold a show in the Forbidden City one day,” Kim said.