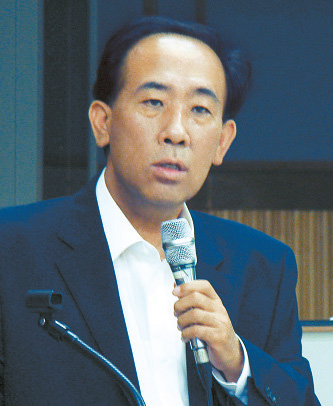 On March 16, the gymnasium at Buram High School in Nowon, northern Seoul, was full. The entire student body and faculty members filled the stands. But they weren’t waiting for an athletic event. They were there to attend the funeral of Shin Ho-keun, 55, a beloved principal who had arrived at the school just three years earlier and whose energetic spirit had sparked a series of changes that transformed the school into one of the most prestigious in the country.

When Lee Hyeon-ji, a third-year student and the student council head, began reading a eulogy he had written, those assembled began to weep.

“It feels like the school is empty. We have lost a person who worked hard for the sake of true education,” said Lee Young-su, a faculty member who hosted the ceremony.

On the morning of March 7, Shin collapsed at his home and was rushed to the hospital, where he was in a coma until his death on March 14.

“Shin was diagnosed with liver cancer seven years ago and I believe his condition worsened from overwork.” Lee said, adding that the principal had worked nonstop for the last two and a half years to transform the school.

When the school opened in January 2005, there were many well-known private high schools in the Buram area and the school struggled to attract students. But that began to change in 2007 when Shin became the principal.

“There is a tendency among public school principals to keep things the same because they get transferred every five years,” Park Chang-ho, 48, a teacher at Buram, said.

But Shin implemented a number of changes that turned the school around. He created an after-school program called Haesol Academy that tailored its classes according to students’ preferences. The program has become so popular with students that other high schools in the area often ask to duplicate it. Currently, the school’s 500 students take some 40 different classes offered as part of the program.

“When I first entered this school, the principal had a gaunt face,” Park Jeong-a, 18, a third-year student, said. “But I never thought he’d pass away so quickly. We all loved him so much.”