U.S. envoy flies in for talks

U.S. envoy flies in for talks 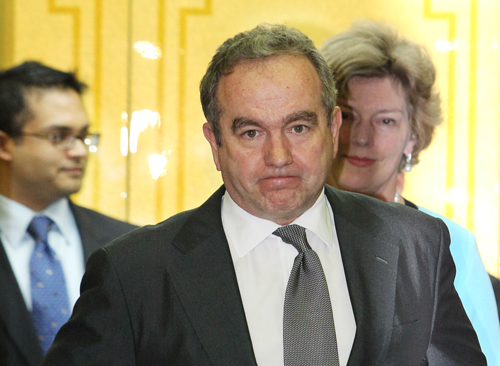 A senior U.S. diplomat met with South Korea’s top nuclear negotiator and other security and foreign policy officials here yesterday for discussions on what he called important “developments” in the region.

“It was important, given the developments, to come [to Korea] for a chance to talk” with officials in Seoul, Assistant Secretary of State Kurt Campbell said at the start of a meeting with Wi Sung-lac, Seoul’s chief envoy in six-nation negotiations on Pyongyang’s nuclear ambitions.

He did not elaborate on the “developments,” but his trip came amid reports that North Korean leader Kim Jong-il is likely to visit China soon, a move that could lead to the resumption of the nuclear talks that also involve South Korea, the United States, Japan, China and Russia.

North Korea has stayed away from the nuclear negotiations since December 2008, and now says it will not return to the negotiating table until the start of discussions for a peace treaty and the removal of UN sanctions, imposed shortly after the North’s second nuclear detonation test last year.

Pyongyang is also asking for a bilateral meeting with Washington to discuss such conditions for its return to the six-party talks, but the U.S. remains reluctant to engage in any direct dialogue without a guarantee of the North’s return to the negotiations.