Young skater chalks up another win

Young skater chalks up another win 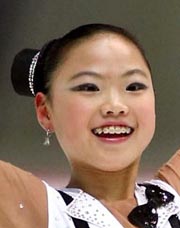 Twelve year-old figure skater Kim Hae-jin has added a 2010 Triglav Trophy to her list of accomplishments, with a score of 144.11 combined points giving her a first-place finish in the novice level.

The Triglav event in Jesenice, Slovenia, is divided into men’s and women’s senior, junior and novice levels. Kim, competing in the under-13 novice event, scored 49.68 points in the short program on Friday and early yesterday added 94.43 points in the free skate for first place.

The top three finishers were all Asians; Satoko Miyahara and Riona Kato of Japan finished second and third, respectively.

With the win, Kim joins a select few Korean skaters who have won the Triglav Trophy in the past, including 2010 Vancouver Winter Games gold medalist Kim Yu-na, who took home the trophy in 2002.

Kim Hae-jin is a bright prospect who is years ahead of her peers. She came to the tourney from a first-place finish in the 2010 South Korean Figure Skating Championships on Jan. 9-10. There she racked up a combined score of 148.78 points, becoming the youngest skater since Kim Yu-na won the national title at the age of 13.

At the Korean Skating Union-sponsored national championships, Kim Hae-jin defeated Kwak Min-jung by 14.55 points, even though Kwak is three years her senior and was set to compete in the 2010 Vancouver Olympics. Kim was the youngest among the skaters ranked in the top 10 at the national championships.