Professor is one part chemist, one part artist

Professor is one part chemist, one part artist 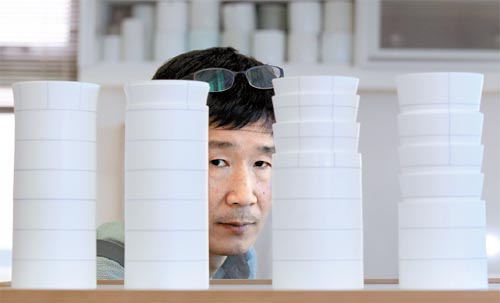 Out of 1,000 competitors at the Internationale Handwerksmesse in Munich, Germany, Hwang Kap-sun was one of only 21 craftspeople to win a gold medal.

The 47-year-old ceramics professor of the College of Fine Arts of Seoul National University took home a 5,000-euro ($6,740) prize with his medal at the event, which was held from March 3 to 9 and attended by over 15 million people.

When Professor Hwang turned up for his interview with the JoongAng Ilbo, it was in work clothes smeared with white powder. The first thing Professor Hwang insisted on showing off was not his award, but his students, all busy at work.

“We use kaolin from New Zealand, or white clay from Germany. These are materials of the highest quality that even professionals have difficulty using. Most people use cheap 5,000 won ($4) trimming knives or fashion them out of bent wooden pokers,” Hwang said. “But we use 150,000 won knives with brass handles and chrome coating. Every day we turn the spinning wheels working with the best materials and tools.”

After arriving at Seoul National University in the autumn of 2003, Professor Hwang established a system to promote, as he put it, an “environment to allow the limitless use of materials.” Instead of paying 250,000 won per semester in materials fees, students are asked to donate 10 percent of their competition winnings or earnings at markets.

Most students tend to use up more materials than the amount they donate, but Professor Hwang said the experience helped those students to produce works of higher caliber that will receive more awards, and to sell more pieces.

Hwang repeated the term “industrial standard” again and again, explaining that major German ceramics companies like the National Porcelain Company of Meissen managed to reconcile industry and art many years ago. While his college students are encouraged to cultivate an experimental mind-set, Professor Hwang finds it impossible to ignore the tastes and approval of society or the market value of his students’ art pieces.

The alluring beauty of ceramics first captivated Hwang when he saw the work of the German association of ceramics makers Keramikergruppe 83 as a sophomore at the College of Fine Arts of Seoul National University.

“I was struck by how dirt could be so transformed. I thought it was true chemistry. So I left for the Muthesius-Academy of Fine Arts in Kiel, Germany.” Hwang’s mentor there, Professor Johannes Gebhardt, supported him, and he was constantly in the studio, drinking in cutting-edge German technology and materials like a sponge. Soon Hwang had scholarships and his own workroom. Later, he married Kang Ji-sook, one of his colleagues.

One area in which Hwang has particular interest is glaze. Professor Rudiger Joppien, an art historian at the Hamburg Museum of Art and Industry has called him “someone who knows how to express the subtle nuances of transparency and refraction of light by using hundreds of different kinds of glaze.”

Professor Hwang’s computer contains a plethora of data on how to extract potassium, sodium and magnesium from kaolin, quartz, feldspar and limestone, and on what kind of work is produced when certain materials are mixed just so. He shares the data with students and graduates alike.

Hwang’s resume is a long on honors. He won his first Red Dot design contest in 2003, and took another Red Dot in 2005 for a silky-smooth ceramics piece. But he’s most proud of his Kultur Aktuell, a German cultural prize he won in 2003. Previously won by Yoon Yi-sang, it’s given out only once every two years, and Hwang was the 19th person to receive one.

When asked what exactly ceramics mean to him, Professor Hwang’s answer was firm and concise.

Quoting Pak Che-ga’s “Pukhak ui,” Hwang said, “When the master sculpted in a rough manner, the people worked in a rough manner. This was because the heart itself had roughened. When even one porcelain plate could not be properly produced, all sorts of things in the country emulated that rough plate.”

The public will have the chance to judge the passionate work of Hwang and his students for themselves when they go on display in an exhibition titled “Sedimentation” from April 1 to 24 at Gallery LVS in Sinsa-dong, Gangnam, southern Seoul.