Two pioneers on zither and bass

Two pioneers on zither and bass 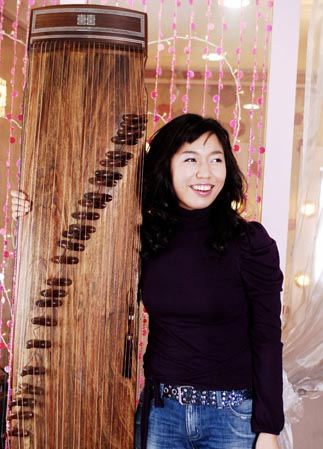 Korean traditional instrumental performers have been working for years to popularize “fusion gugak,” referring to a blend of Korean traditional music and Western classical or pop sensibilities. But often, composers end up with simple remakes of American standards played on Korean instruments - not exactly a balance of styles.

But Jung Mina is unique. As a player of the gayageum, a zither-like Korean instrument, since her teenage years, the 30-year-old artist now composes, arranges, sings and even writes lyrics for her own music - “fusion gugak” from scratch.

The duo first got together after an improvisational event, Jung recalls. “We had planned to record just one song together. We jammed during some extra time at the studio and bam! - the harmony turned out to be incredibly fantastic. So we decided to do some more songs and fill the album with instrumental tracks,” she said in an interview recently.

That near 15-minute recorded jam session would become the album’s eighth track, titled, “Improvisation, Nov. 30, 2009.” The two musicians ended up playing together on seven out of the disc’s 10 tracks.

Jung’s latest recording comes three years after her debut album, “Sangsamong,” or “Love Dream.” That album has sold nearly 10,000 copies, which might sound low but was in fact much more than expected for the first album of a low-profile artist previously known only to the clubgoers around Hongik University in Seoul. Love Dream’s title track, “As What Creature,” features Jung on vocals and the gayageum, with a cello accompaniment in the background. It was nominated for “jazz/crossover song of the year” at the fifth Korean Music Awards in 2008. Some tracks have been used in commercials and movies, including the film “M.”

“While I tried to include a wide spectrum of musical genres that have relatively high popular appeal, from jazz to tango and gugak, on my first album, this time I opted to give the audience a chance to rediscover gayageum music,” Jung said.

When she debuted, it was not only her music that won her the media spotlight but also her unique personal history. Born to a novelist father, Jung was trained to become a traditional dancer at a young age. Then she switched to the gayageum, got into Gukak National High School, Hanyang University and finally the graduate school at Sookmyung Women’s University, all to study the instrument.

Even after a decade of playing the gayageum, however, Jung couldn’t land a regular job, as she failed in a series of auditions for Korean traditional orchestras. Pressed due to her family circumstances, she had no choice but to rotate through several part-time jobs including convenience store clerk, racetrack ticket seller and homeschool teacher. At night, starting in 2004, she sang and played gayageum at Hongdae clubs, often with other independent musicians. At long last, in 2006, she won the chance to record her first album when her application for a state-funded recording project was accepted. She was still working a day job as a telephone operator at the time.

Between her many jobs, she attended private institutes to learn the formal patterns of Western music and jazz, to complement her existing knowledge of Korean traditional music.

“Understanding of Western music was necessary for communicating with my fellow performers. When they play gugak, they should learn Korean traditional musical theories and terms as well,” she said. Through the learning experience, she realized the blues scale of the Western music went very well with the gyemyeon mode, a minor key in gugak, and adopted this new finding into her music.

With her recording debut, she quit her full-time job to become a professional musician.

“I have managed to scratch together a living with my earnings from music - stage performances and copyright income - even if it is still far from being huge,” she said.

Now, Jung feels her past failure to become an orchestra member was a blessing in disguise.

“Should I have passed in one of the auditions, I would have gotten good job stability and social status. But I would have never faced a life-changing turning point. Performing at Hongdae clubs over the years has dislodged my range of personal biases about society, and I’ve become a better person,” she said.

Jung has a series of upcoming events that are expected to propel her into the mainstream.

On April 16 and 17, Jung and Seo will hold their first joint recital at Jayu Theater in Seoul Arts Center in southern Seoul.

Jung is also being featured in an independent documentary film. The film has been shooting her street performances as well as a 15-day tour across big and small towns in Korea since August last year, and it’s set for release in December.

Naturally, Jung is in charge of the score.