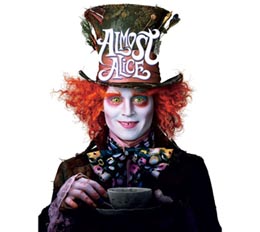 Ever since Jefferson Airplane’s 1967 hit “White Rabbit,” it’s hard to imagine any music inspired by Lewis Carroll’s “Alice’s Adventures in Wonderland” that does not involve acid trips and psychedelic rock.

So I was apprehensive when I saw the list of teenybop stars on the new “Almost Alice” album. A musical accompaniment to Tim Burton’s imaginative interpretation of the Carroll classic, the album features a parade of pop rockers including Avril Lavigne, Tokio Hotel and Pete Wentz.

After listening to the album, though, I found my biggest disappointment wasn’t in the choice of artists, but in how utterly un-Alice the songs on the album are.

Lavigne’s “Alice,” the only song actually played in Burton’s film (albeit over the end credits), sounds identical to her other skater ballads except for a passing mention of Wonderland. Indeed, it feels like many of the songs were peppered with Alice allusions after the fact, instead of taking their inspiration from the story.

There are a few exceptions to this. Franz Ferdinand’s “The Lobster Quadrille” is one of them. The Cure’s Robert Smith’s dreamy cover of “Very Good Advice” from Disney’s 1951 Alice film is another.

The bottom line? White Rabbit fans will be disappointed, but this album will have sk8er kids bopping their heads for weeks.