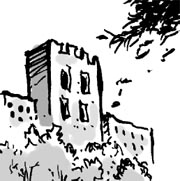 T.S. Eliot, an Anglo-American poet, famously wrote in his poem “The Waste Land” that “April is the cruellest month” because it stirs dull roots with spring rain, mixes memory and desire and breeds lilacs out of the dead land.

On the U.S. Web site “College Confidential,” which hosts a popular college admissions forum, you can see the wide range of emotions that play out in the college application process. Some students are grief-stricken because despite their perfect SAT scores they didn’t get into an Ivy League school. Others are ecstatic that they made it into their first choice school, despite having poor standardized test scores. The complexity of the American admissions system - which looks at both test scores and measures of a student’s character, such as volunteering or after-school activities - makes April a roller-coaster month for high school seniors.

The U.S. first adopted this admissions system in the 1920s as a way to discriminate against Jewish students. Dartmouth University was the first to implement the new system. The admissions officers examined both applicants’ test scores and extracurricular activities, although in reality Dartmouth and other universities used the system as a way to reduce the number of accepted Jewish students. As people in the U.S. became more progressive, this sort of discrimination in the college admissions system declined and today we hold up the U.S. system as a model for our own country.

Parents feared that U.S. schools would not admit Korean college applicants because of the scandal.

But those worries were proved groundless as over 25 out of a total of 84 graduates of the International Program of the Korean Minjok Leadership Academy in Hoengseong County, Gangwon, enrolled in Ivy League universities, including Harvard and Yale, this year.

Many others also entered Stanford, MIT and Oxford and over 50 graduates have been admitted to different campuses at the University of California.

I look forward to seeing them grow up to be strong assets for the future of Korea.