Mission shifts from rescue to salvage

Mission shifts from rescue to salvage

Navy personnel carry the body of Senior Petty Officer Nam Ki-hoon, who was recovered on Saturday from a rear section of the sunken Navy corvette Cheonan, to the Second Naval Fleet base in Pyeongtaek, Gyeonggi, yesterday. Nam was the first of the 46 missing crew members to be found since the Cheonan sank on the night of March 26. [YONHAP]


South Korea’s military began preparations to salvage the sunken Navy patrol ship Cheonan yesterday, after the families of the 45 sailors still missing from the disaster asked them to call off rescue operations a day early.

After the body of a missing sailor was recovered from the rear half of the sunken ship, the families said they did not want to risk the death of another would-be rescuer. Warrant Officer Han Joo-ho died last Tuesday after a dive into the frigid, murky waters where the ship went down, and a fishing boat involved in rescue operations was downed on Friday. Two sailors of the boat were found dead on Saturday and seven other crew members from that boat are still missing.

In a wrenching decision, the families asked the Navy to stop the underwater search and begin hoisting up the Cheonan.

“We are asking the Navy to call off the rescue operation,” Lee Jeong-guk, who represents the sailors’s relatives, said during a media briefing at 9:45 p.m. Saturday at the Pyeongtaek fleet.

“We are not saying hope for their survival has faded away. Relatives [of the missing crew] have agreed to ask the Navy not to make further efforts to enter the sunken hull because we worry that more could be sacrificed.” 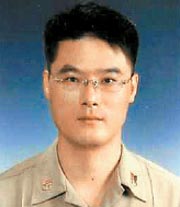 Hope for the sailors’ survival faded after the body of Senior Chief Petty Officer Nam Ki-hoon, 35, was recovered at around 6:10 p.m. Saturday inside the petty officers’ mess hall in the rear section of the corvette, according to defense officials in Seoul. His body was found half-clothed in battle dress uniform.

Nam’s body was immediately taken aboard a South Korean rescue vessel Gwangyang and then transferred onto the ship Dokdo. Yesterday morning, he was flown to the Second Naval Fleet base in Pyeongtaek, Gyeonggi, via helicopter.

The families have demanded that the Navy return any other bodies recovered during the salvage operation to the Pyeongtaek fleet base. But they have agreed with the military that they will not discuss any funeral arrangements until all the bodies have been recovered.

Yoon Won-sik, deputy spokesman for the Defense Ministry in Seoul, said in a media briefing that the military called off search and rescue operations as of 11 p.m. Saturday and switched its focus to salvage.

Yesterday, the mission to pull up the front and rear sections of the corvette got under way with the help of private firms. The military will do whatever it takes to complete the operation, Yoon said.

“The military will do its best to lift the sunken ship as soon as possible, in consideration for the families’ feelings,” a Navy officer said on condition of anonymity.

The officer said the Navy will team up with private companies to design detailed salvage operational plans. He estimated the process could take up to a month.

The Navy’s underwater demolition team and salvage ship unit members, as well as the U.S. landing ship Harpers Ferry, will assist in the salvage operation, the Navy source said.

Salvage operations will be conducted in five stages, with different companies using floating cranes to pull the wreckage from the seabed, according to Commodore Lee Gi-sik, chief of information operations at the Joint Chiefs of Staff in Seoul.

At around 2 p.m. yesterday, a sea crane arrived some 400 meters (1,312 feet) southwest of the spot where the rear of Cheonan sank in depths of 45 meters.

A second, 3,600-ton crane departed from Geoje yesterday to help the salvage mission. It is scheduled to arrive at the site on Wednesday, and will be used to pull up the front section of the patrol ship.

The 1,200-ton Navy patrol combat corvette Cheonan sank on the night of March 26 after a mysterious explosion ripped it apart near the disputed maritime border with North Korea in the Yellow Sea.

Among the 104 crew members on board, 58, including the captain, were pulled out alive.