Pride and tears as diver laid to rest

Pride and tears as diver laid to rest 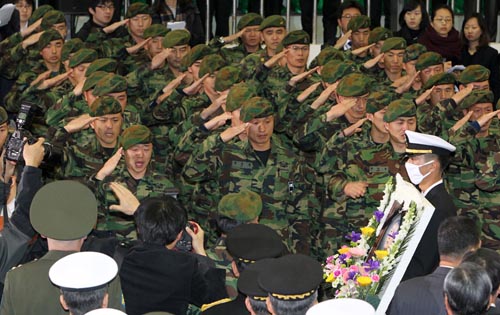 “We are men of steel/ We sacrifice our lives for our country/ We live and die with faith and loyalty/ Let us go to the sea, our paradise,” sung a group of underwater demolition team members past and present, moving their right arms up and down with the rhythm of the song.

Their collective voice was strong, but faint whimpers could be heard between the lines. It was their last salute to Han, who was nicknamed “the legend of UDT.”

During Han’s five-day wake, 8,000 people came to pay their last respects, including President Lee Myung-bak. Around 1,000 people, including family members, UDT members, high-profile government officials and lawmakers, were there on the day of the funeral.

Experts say that the strong national sympathy for Han’s death is due a thirst for a “hero,” in a time when heroism is thin on the ground. “Han is a rare case in these times. He sacrificed his life for the military and the country,” said Cho Dae-yeop, a professor of sociology at Korea University.

Meanwhile, Warrant Officer Kim Chang-gil, Han’s junior at UDT, recited a funeral address that turned the gymnasium into a sea of tears.

“Seonbaenim [superior officer], you have lived a steady, fast-paced life in the military for 36 years. What pressed you on that you had to go so quickly, only to be returned to your family’s arms as a cold corpse? ... You are forever our teacher,” he said.

Han’s body was cremated and then buried at Daejeon National Cemetery.