With Cho in lineup, Giants are set to shine

With Cho in lineup, Giants are set to shine 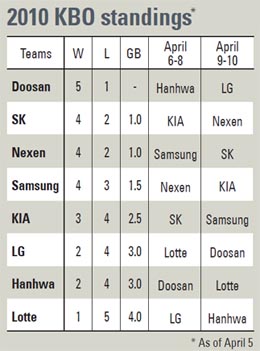 The Lotte Giants got off to a slow start, but they’re ready to pick up speed now that their starting rotation is back at full strength.

With Cho Jung-hoon’s return to the No. 4 spot, the Giants’ pitching lineup now consists of Ryan Sadowski, Jeong Won-joon, Song Seung-joon, Cho, Lee Myeong-woo and Jin Myung-ho, and it will be bolstered by the expected return of Son Min-han in midseason. Lotte will then easily boast the strongest starting rotation in the league.

The buttressed rotation will get its first test in the upcoming six-game stretch against the Hanwha Eagles tomorrow through Thursday and the LG Twins from Friday through Sunday.

The stronger lineup has given manager Jerry Royster the luxury of mixing and matching his pitchers against opponents.

In the April 4 match against the Kia Tigers, Royster decided to play Lee in Song’s place, in order to give Song plenty of rest for a start at Sajik Stadium in Busan.

Having lost two straight against the Nexen Heroes, the Giants have yet to win a game at home. Song, who had strong showings at home last season, is the answer Royster is looking for.

Song is the type of pitcher who needs time to reach his peak. He usually pitches his best during the hottest time of the year, even pitching three consecutive complete games during the summer months last year.

Cho is expected to get the start against the LG Twins tomorrow. Although Cho wasn’t due to return until mid-April, he has made a speedy recovery from an injury to his throwing shoulder that limited his participation in spring training. It is Cho’s first start of the season.

Since completing rehab, Cho pitched against Kia’s farm club last Saturday in Gimhae, pitching two and one third innings and giving up one hit.

Sadowski, who has started two games but has yet to win one, is also focused on earning his first win in the Korea Baseball Organization.