His work is adding flavor to life

His work is adding flavor to life 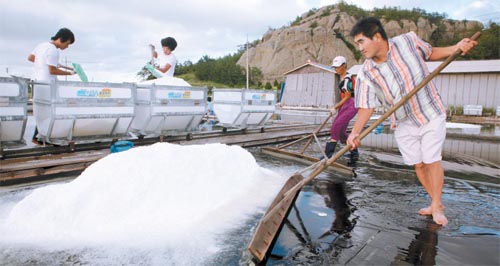 A group of men use rakes to collect sea salt from a salt pond in Shinan County, South Jeolla. [JoongAng Ilbo]

Hideo Ueda, 73, a Japanese expat who runs a sea salt manufacturing company in Korea, has gained a reputation as the man who is crazy about Korean salt.

He was just one of a group of presenters at a recent seminar on the globalization of Korean sea salt held on March 26 and hosted by the Agriculture Ministry and Grand National Party Representative Kim Hak-yong. The seminar was attended by local industry representatives, government ministry officials and lawmakers.

Ueda earned a patent in Japan to manufacture sea salt with antioxidants in 1996. When the Japanese government lifted sanctions on sea salt imports in 2002, Ueda bought a sea salt manufacturing company in Muan. South Jeolla.

Since then, he has focused his energies on promoting his product, both here and abroad. 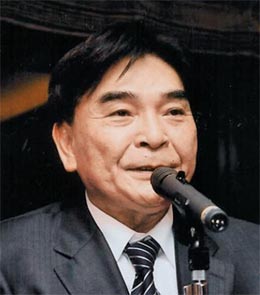 Ueda extolled the virtues of Korean sea salt at the recent forum in Seoul.

“Korean sea salt is high in minerals such as potassium and magnesium, and the mineral content of Korean salt is higher than that of similar products produced in other countries,” Ueda said. “I believe that is because Koreans make sea salt from salt ponds built on mudflats. Also, Korean sea salt is a good source of antioxidants.”

Ueda’s passion for sea salt began to grow in 1985. At the time, Ueda worked in the public relations division of a Japanese jewelry company. He was in Singapore on business, and was planning to return to Japan after a short visit to see his wife’s family in Korea. But on the plane on his way there, Ueda developed a fever, so when the plane landed he went to see a doctor.

“I was diagnosed with acute hepatitis caused by overdrinking and fatigue,” Ueda recalled.

Ueda went to Daejeon to see his parents-in-law and told his brother-in-law that he was unwell.

“My brother-in-law handed me a packet of white powder and encouraged me to drink it with water. He also told me to mix the powder into my bath water and have a soak,” Ueda said. “I followed his advice and then I realized I was getting better. I asked him what the miracle white powder was, and he told me it was Korean traditional sea salt. ”

Ueda brought the “miracle” power to Japan and showed it to his old friend Minoru Sato, a medical professor at Tokyo Kasei Gakuin University. Two weeks later, Sato told Ueda that the level of uric acid in his blood had dropped dramatically since he began consuming the Korean salt. Sato also had Ueda take a blood test 15 minutes after consuming the salt and discovered that most of the uric acid in Ueda’s blood had dissolved.

Ueda said that the incident prompted he and Sato to start doing research on Korean sea salt. Ueda later launched an international symposium on Korean sea salt in Tokyo in 2003 and has continued his research with the Solar Salt Biotechnology Research Center, which specializes in sea salt, at Mokpo National University in Korea.

“I began doing research on sea salt after I met Ueda in 2003,” Ham Kyeong-sik, the director of the sea salt research center said. “I couldn’t decline his suggestion to do research on sea salt because he was completely passionate about it at the time. He also invested a large amount of money into our research efforts.

Ueda said many people in developed countries suffer from mineral deficiencies, and that sea salt is the best alternative to mineral supplements.

“The geography of Japan does not allow the country to produce salt,” Ueda said. “The weather in Japan has temperatures with humidity, so the country can’t produce salt from salt ponds like Koreans can.”

Ueda explained that Japan imports 120,000 tons of salt per year from Mexico and Australia, but said that most of it is mineral deficient so many Japanese believe that adding salt to food is bad for health.

“Korean sea salt is rich in minerals,” Udea said. “If Korea wants its sea salt to be the best in the world, it is crucial that they preserve the peninsula’s natural resources - its salt ponds and its mudflats.”