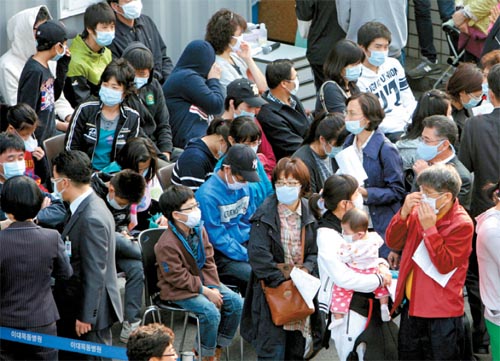 The provisional center to treat influenza A(H1N1) at Ewha Womans University Mokdong Hospital in western Seoul was crowded with people wearing masks in late October 2009, when fears about the flu peaked. Today, most such centers have closed down. By Choi Seung-sik


After the number of patients fell to a trickle from a peak of 1,111 on one day last October, the influenza A(H1N1) treatment center at Myongji Hospital, in Goyang, Gyeonggi, closed down in January. The epidemic that shook the world a year ago has finally subsided.

It was just 11 months ago that Korea diagnosed its first H1N1 patient. Last Wednesday, the Korea Centers for Disease Control and Prevention downgraded Korea’s flu danger level from “caution” to “interest,” and it’s been six months since the government classified the threat as “serious.”

With that, the Health Ministry disbanded its task force to monitor the pace of infection and develop countermeasures to mitigate the spread of the disease. Also on Wednesday, the KCDCP ended its H1N1 flu vaccination program, which started in late October. As of this March 31, 14.6 million people had received vaccinations in Korea.

“We sent an official letter asking all hospitals and clinics to finish vaccinations as of the 31st [of March] and send the surplus vaccine to regional health clinics,” said Lee Jong-gu, head of the KCDCP.

The center said that until the end of this month, it will provide free antiviral drugs including Tamiflu and Relenza to people with a prescription from a hospital.

From March 14 through 20, 4.66 hospital patients out of every 1,000 reported an “influenza-like illness.” That was a tenth of the number reported last November.

At its height in Korea, the flu killed around 10 people per week last year; last week saw not one casualty from the flu. To date, H1N1 has killed 250 people in Korea and 17,000 people globally.

“The fatality of the A(H1N1) influenza differed a lot by country, depending on the state of hygiene,” said Kim Wu-ju, a infectious diseases professor at Korea University. “The lethality rate in Korea is close to other developed countries like the United States, at around the 0.01 to 0.1 percent level.”

Although that was higher than the level for normal seasonal flu, H1N1 is much less deadly than the Spanish flu (2.5 percent) and avian influenza (60 percent). However, the new strain of the disease spread more quickly than bird flu would in Korea. Around 3.5 million antiviral drug injections were given out in the country, and Kim estimated the number of people infected with H1N1 in Korea totaled around 1.2 million people.

The numbers make it a record-breaking contagious disease.

Many conspiracy theories arose after the World Health Organization last June classified influenza A(H1N1) as a “pandemic.” Some even accused pharmaceutical companies of developing the disease as part of a conspiracy to sell more vaccines and antiviral drugs.

Experts such as Kwon Jun-uk, the division head of the contagious diseases department at the KCDCP, are quick to put a stop to such rumor-mongering. “Because it was a rare virus, experts were not able to predict the threat early on,” Kwon said.

For many people, the key lesson from the flu epidemic in Korea is that prevention is the best medicine. Sales of hand sanitizer and other sanitary products soared during the second half of last year and continue to do well today.