Masters of Korean tradition aren’t Korean at all

Masters of Korean tradition aren’t Korean at all 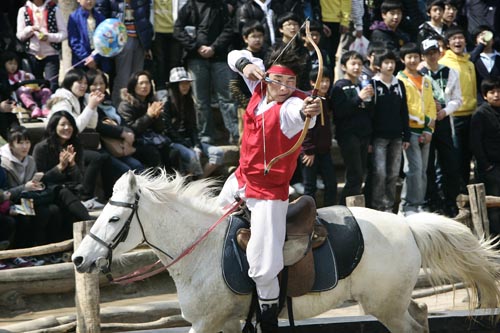 Ganzorig, a Mongolian performer, draws his bow as he nears a target during a performance on March 29 at the Korean Folk Village, Yongin, Gyeonggi. By Oh Sang-min

YONGIN, Gyeonggi - The sound of the barrel drum crashes through the spring air at the Korean Folk Village here, rising in a thunderous crescendo as five young men dressed in white traditional hanbok, accented with red vests and headbands, ride onto the oval-shaped outdoor stage.

Some of the excited horses lift their legs and neigh, at which their riders tug the reins. The empty seats surrounding the stage quickly fill, with foreign tourists holding camcorders and carrying bulky backpacks, Korean families and teenagers on school trips.

Finally, the show begins as a female voice echoes from a speaker system: “Horseback archery is a long-held Korean tradition, widely practiced from the Three Kingdoms Period [57 B.C.-668] until the Joseon Dynasty [1392-1910]. With this show, we bring to you a fully restored version of horseback archery.”

At that, the five young men gather speed, riding around the rink in every imaginable position. They stand, lie down, wave their arms in the air, jump from one side of horse to another with their hands on the saddles and even leap off to run with the horses before jumping on again. After the acrobatics, out come the bows. Arrows fly at the bull’s-eye. Riders pick up a stuffed doll from the ground, then another stands on one of his colleagues’ shoulders. Despite the apparent danger, the young men keep smiling, even hamming it up to the crowd with zany facial expressions, victory signs with their fingers and winks at the audience. People gasp and cameras flash.

“My my, they think of horsebacks as their beds,” Yongin resident Lee Jeong-ae, 81, said admiringly while watching the 20-minute show with her husband.

The riders perform twice daily at the folk village, which opened in 1974 and has become known as an accessible, entertaining way to learn about Korean traditions and culture for tourists and locals alike.

After the show, the seats are empty, but the young men are still busy. Some trot the horses to cool them down, while others sprinkle water on them to get rid of the dust left by all the bustle. And some enter a dim traditional hanok home that they use to prepare for shows.

It’s all traditional and impeccably Korean - except for a small portrait of a Mongolian warrior hanging on the wall. When the riders finally speak to each other, it’s not in Korean, but in Mongolian. That’s because, even though they perform this traditional Korean art, all five of these small but fit young men are immigrants from Mongolia.

In a nation where millions of foreign migrant workers land menial jobs - the so-called “3D,” or “dirty, dangerous and difficult” labor - these young men play a different role. They have one thing in common with 3D workers, though - both are doing a job Koreans are unwilling or unable to perform.

“You have to risk your life” in order to do horseback archery, said Ko Sung-kyu, 50, who has headed a horseback archery team in Jangheung, Gyeonggi for the past 12 years. “Since it is very dangerous, it’s hard to find Koreans who can perform every day.”

During the Joseon Dynasty days, all Korean soldiers had to pass a course in horseback archery to become officers, but today Mongolians are employed performing the art at folk villages and theme parks across the country, including the Shilla Millennium Park in Gyeongju, South Gyeongsang, which is based on the ancient Silla Dynasty (57 B.C.-935) from the Three Kingdoms period, and the MA Park on Jeju Island. 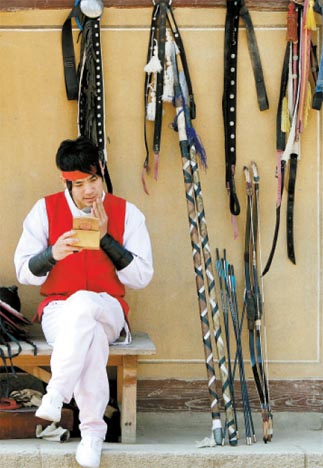 Nyamba looks into a mirror before a performance. By Oh Sang-min

Mongolians are perfect for the task because horseback riding is still a major, living part of their culture, enshrined as one of the three biggest competitions during the annual Naadam Festival, along with wrestling and archery. Many Mongolians today still ride horses in their everyday lives, and it’s not uncommon to see a horse trotting alongside honking cars on the chaotic roads of the capital of Ulan Bator.

The Shilla Millennium Park’s performers “are mostly Mongolians,” said Jeong Mi-ae, an official on the park’s marketing team. “But the horseback archery show is still a fine representation of the courage of the hwarang during the Silla Dynasty,” added Jeong. The hwarang were groups of upper-class warriors who competed for control of Silla and practiced extensive martial arts skills.

The MA Park has adopted a different attitude, using its 50 Mongolians performers’ heritage as a selling point in their show titled “Black Flag of Genghis Khan.”

The nationality of the riders came as a surprise to some in the audience at the folk village, however.

“I didn’t know that they were Mongolians, but it’s understandable because they have a horseback-riding culture,” said Megan Wilson, 42, who was visiting the Yongin Korean Folk Village with her husband, on vacation from their home in Vancouver, Canada.

Some even criticize theme parks and folk villages for hiring Mongolians.

“They want to save money. That’s why they hire Mongolians and let them imitate Korean tradition. They are deceiving the audience,” said Park Chun-sik, secretary general of Korean Traditional Equestrian Martial Arts, an association based in Sokcho, Gangwon.

Despite the criticism, the young men themselves believe they are honoring their home country by performing Korean traditions.

“I think it is a way to raise the name of my own country,” said Ganbaa, the oldest of the five, in rocky but fluent Korean. Like many Mongolians, Ganbaa has only one name. Since the head of the horseback archery team was visiting Mongolia on business, Ganbaa was leading his peers. Most of them are 20 or 21 years old and had just graduated from horseback-riding schools when they auditioned for the job in Mongolia, a folk village official said. They also had some time to practice horseback archery before they made their debuts.

“I feel good when they laugh and applaud,” said Ganbaa, 27, with a shy smile. Ganbaa has been living in Korea for five years, while his colleagues have been here one to three years.

Living together in an apartment provided by the folk village, they cook Mongolian food and watch TV shows about their own country on the Internet whenever they feel homesick.

But food and TV are not enough to fill them up. “I always miss my mom and dad,” said Nyamba, 20, who’s been in Korea for a year, using Ganbaa as an interpreter. 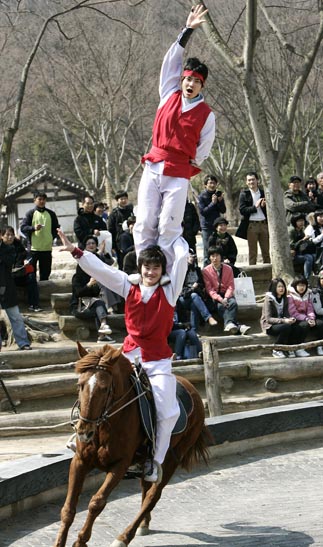 Two of the five Mongolian performers, Ganbaa on the bottom and Nyamba on top, show off a little acrobatics before taking up their bows last week. By Oh Sang-min

At work, though, the riders are nothing but professional. They always tidy up before every show, polishing their boots, sewing up rips in their jackets and warming up. They also take care of the horses.

“They are far better than vets when it comes to caring for the horses,” said Kim Won-kyeom, an official at the folk village who promotes the horseback archery show.

They also know how to greet visitors in a modern, Korean way: When I arrived to visit, they immediately served me instant coffee in a paper cup, just as I would receive in a Korean high-rise office building.

Although horse riding runs in their blood, doing such a tough and intensive show every day all year is still a daunting task.

“It’s not that hard,” said Ganbaa humbly, but he quickly added, “just a little hard when it’s way too cold or hot because my horse and I sweat a lot together and it causes some skin troubles.”

Ganbaa pointed to a paper bag of medicine placed on the coffee table. That, along with the rough, red hands and dust-caked boots and clothes of these baby-faced young men, speak of their strenuous lives. But, after some coaxing, they admitted it was their dreams that keep them going.

“I’m a little worried because I didn’t study that much. But I want to pass the test and launch a circus show of my own sometime in the future, because there is no big Korean circus show.”

For Ganbaa, the breadwinner in a family that includes his mother, older sister and a niece living in Ulan Bator, Korea is a country of opportunity.

Kim at the folk village said, “As far as I know, Ganbaa purchased land about the same size of this folk village in his home country with his salary.”

The other young men have their own dreams: teaching Koreans horseback-riding skills, or launching special horse shows of their own.

And Mongolians aren’t the only non-natives who have played major roles at the folk village. From 2000 until 2008, a group of ethnic Koreans from China performed neolttwigi acrobatics, in which two people jump up into the air at each end of a seesaw board. The higher the jump, the better. This Korean style of seesawing was widely performed by women from the Goryeo Dynasty (918-1392) to the Joseon Dynasty.

Despite the popularity of the show, the folk village had to bring it to an end. “It may look like a simple show, but it is a very physically demanding job. Performers suffered from waist injuries,” said Kim.

“It was just too hard to find people who could do the show. So we gave it up.”