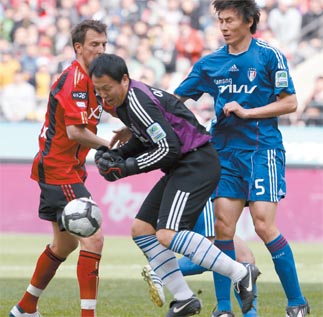 Suwon’s Lee Woon-jae, center, struggles to save a shot during the April 4 match between Suwon and FC Seoul at the Seoul World Cup Stadium. By Jung Si-jong

National football manager Huh Jung-moo has a tough call ahead. Before he announces his 23-man roster for the 2010 World Cup at the end of this month, he must decide whether to play or pass on veteran goalkeeper Lee Woon-jae of the Suwon Bluewings.

Lee is the finest in the league, but the man is not playing his best. During last Sunday’s match against FC Seoul, he committed a horrendous error in the 27th minute, as his team trailed 0-1. In a left-footed attempt to clear a pass from his defender, Lee was stopped by Seoul forward Jung Jo-gook in Suwon’s defensive zone, leading to Seoul’s second goal of the game.

That wasn’t all. Huh and his coaching staff have to be concerned about FC Seoul’s other two goals by Ricardo Esteves and Choi Hyo-jin. In the past, Lee would have blocked them.

“It might be fatigue setting in, but he’s not playing up to his capabilities,” said Huh. “I’m concerned it might lead to a drop in his play.”

Suwon has played in five league matches so far this season, and given up 12 goals. While Suwon’s defense has not provided stable play, neither has the goalkeeper.

“Lee has great reflexes and it helps him to cut down on the angles, but I didn’t see any of that in the game against FC Seoul,” said national team goalkeeper coach Kim Hyun-tae. “He’ll need to work on improving his physical conditioning and approach the upcoming months with the mind-set he had for the 2002 World Cup.”

Kim is supportive of his player.

“Mistakes happen. He’s tired because of the hectic schedule - league matches and Champions League matches - but he’ll be ready for the World Cup,” said Kim.

“We have evaluated all the goalkeepers in the K-League but none can compare to Lee at this point. And maybe his poor play of late will spark a sense of competition among the younger goalkeepers on the national team.”

Lee is a veteran who has three World Cups and 129 international matches under his belt. But if he can’t step up by the Cup, the national team coaching staff has options.

“We always have a backup plan. Jung Sung-ryong has been playing well for Seongnam. He has a stable and calming presence in the net and should play well for the national team,” said Kim.

Kim Young-kwang of Ulsan is also eagerly waiting for an opportunity.

It will be interesting to see if the reliable veteran will maintain his place or a young player will emerge as the new goalkeeper of the national team.