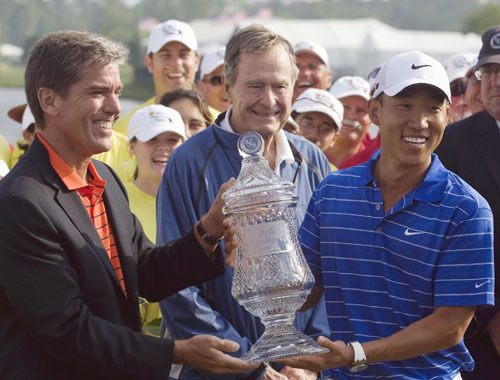 Kim had to go an extra hole to win the Houston Open title and while he didn’t play as consistently all week as he would have liked, he got the job done with a closing round of two-under 70.

“I hit it off the deck a couple times,” Kim said. “If there is something my dad taught me it is to believe in myself when no one else does.”

The 24-year-old Kim and Taylor, who shot 68, were tied at 12-under 276 in regulation. Kim two-putted on the playoff hole to make par. Taylor had to hit out of the sand and came up short on an 18-foot par putt for a bogey.

Kim, who was playing through the pain of an injured thumb, appeared to be headed to victory on the final hole of the round but missed a five-foot putt for a bogey to send the match into the playoff.

Kim said one of the keys to his win was staying calm.

“Two years ago, that bag may have been in the water,” Kim said. “I might not have had clubs to go to the playoff. But I just feel calm out there, I feel no sense of urgency.

“I’m comfortable with who I am out there. I found my identity.”

He now heads to the Masters, where he hopes to carry the momentum over from this win to the season’s first major championship.

Kim won for the first time since the 2008 AT&T National. He also won the Wachovia Championship in 2008.

Taylor closed the gap on the back nine with consecutive birdies on the 12th and 13th holes.

But he was unable to get the victory that would have earned him a place in the Masters.

South Africa’s Charl Schwartzel (67) and Canadian Graham DeLaet (68) finished one shot back at 11 under.

Meanwhile in Rancho Mirage, California, Taiwan’s Yani Tseng held off Norway’s Suzann Pettersen by one shot to win her second major LPGA title at the Kraft Nabisco Championship on Sunday.

Tseng began the final round tied for second with Pettersen and an eagle at the par-five second and a birdie at the par-four third propelled the 21-year-old to the top of the leaderboard.

As Tseng watched nervously, Pettersen piled on the pressure and was unlucky to miss an eagle chip at the par-five closing hole.

The Norwegian could only sink a birdie to close on 276.

“I mean, obviously coming down the stretch we both want to win,” Pettersen said. “We’re still good friends, but the competitive side probably takes over.”

South Korea’s Kim Song-hee closed with two-under 70 to take third at nine-under 279. World No. 1 Lorena Ochoa was fourth on six-under 282 with third-round leader Karen Stupples of Britain tied for fifth after she closed with a six-over 78.

Tseng had held a four-shot lead at one stage but played conservatively down the stretch, parring her final six holes after a bogey-five at the 12th. Pettersen moved steadily into contention with three birdies on the back nine, reducing Tseng’s lead on the par-five 18th to two shots.

Tseng sent her drive on the final hole into the primary cut of rough just off the right side of the fairway. Pettersen blasted her drive down the middle, allowing her to go for the green in two.
Tseng laid up, but hit her third shot on the green, 12 feet below the hole, setting up the dramatic finish. Pettersen thought her shot just might fall, settling for a tap-in birdie, giving Tseng two shots to win.

Her birdie putt came up short, but the tap-in par gave the 21-year-old her second major championship and third win on the LPGA Tour.