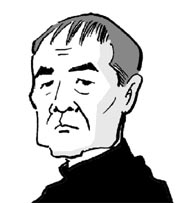 Nicknames often describe a person’s physical appearance, personality or prominent interests. They can have both positive or negative connotations, but once a nickname is given, it is hard to change it.

Recently, the nicknames of President Lee Myung-bak’s economic team have been floating around.

Choi Joong-kyung, who was just named senior presidential secretary for economic affairs, is called “Choi Hitler” by his critics. This name is said to originate from his insistence several years ago that he would keep foreign exchange rates at the current level no matter what the costs - even if it meant using the Bank of Korea’s power to print money. The famous German dictator also had a policy to print more money to offset foreign debts.

Kang Man-soo, the first senior secretary for economic affairs under the Lee administration and chairman of the Presidential Committee on National Competitiveness, is called “Kang Gojib,” meaning a stubborn man, as he always pushes his decision through.

Even animals, things or groups have nicknames. A group of people who served for the former Ministry of Finance had the nickname “Mofia,” a combination of “Ministry of Finance” with “Mafia.” Such a nickname originated from a long tradition of hierarchical relationships and obedience.

Whenever people mention the “Mofia,” Minister of Strategy and Finance Yoon Jeung-hyun responds gruffly, “They are hardworking public officials fully armed with patriotism and pride.” His nickname is “Big Brother Yoon.”

President Lee has been called “The Bulldozer” for years. The name originated from his time working at Hyundai Construction. When Lee was mayor of Seoul and embarked on the restoration of the Cheonggye Stream, his nickname took on a new dimension. A highway was literally bulldozed and the earth dug up to make the stream.

The late Warrant Officer Han Joo-ho, who lost his life during a search operation for sailors on the sunken ship the Cheonan, has been given a touching nickname by the public. People have begun to refer to Han as “Younger Brother.”

While Han was 53 years old, the term of endearment is fitting for him because of his youthful enthusiasm and bravery in his line of work. He was the oldest soldier among the Korean forces dispatched to counter pirates in the waters off Somalia. But he always insisted on standing on the front lines, and never hesitated to risk his life for his country.

Newspapers have given the late Han another nickname - “the legend of the underwater demolition team.” Readers have told us that they plan to keep Han’s obituary with that nickname in their files for a long time.

Han will forever live on in our hearts as our dear “younger brother” and national hero.