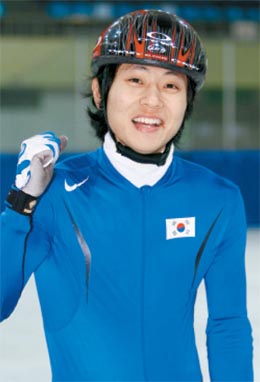 The father of an Olympic medalist who last month accused the Korean Skating Union of manipulating team rosters has made another shocking statement.

“I want to take Hyun-soo and leave the country,” Ahn Ki-won, the father of Ahn Hyun-soo, who won three gold medals at the 2006 Turin Winter Games, told the JoongAng Ilbo.

“Hyun-soo wants to redeem himself here but I want to take him abroad, forcefully if I have to.”

Ahn last month charged that Lee Jung-soo had been deliberately left off the team for the 2010 World Short-Track Speed Skating Championships in Sofia, Bulgaria, in order to give favorites of the KSU brass a shot at winning. Lee, a two-time gold medalist at the 2010 Vancouver Olympics, was initially thought to have pulled out of the tourney because of an ankle injury. However, the elder Ahn posted a message on his son’s Web site saying Lee had been forced to drop out for other reasons.

Relations between Lee and Yoo Tae-wook, the vice president of the KSU, have been strained since Ahn’s accusations surfaced. Lee is thought to have moved his usual training ground from Mok-dong in order to avoid Yoo.

Ahn’s charges brought the KSU under investigation by the Korean Olympic Committee, which is expected to conclude its probe this week. The KSU has denied the accusations.

Ahn Hyun-soo has not competed with Korea’s national team for two years. Exempted from mandatory military service after winning in Turin, he is free to change his citizenship and join another national team as long as the skating unions of the two countries agree, a KSU official said.

Ahn is expected to compete in the national team tryouts at the National Training Center in Taeneung, northern Seoul, between April 23 and 24. However, the elder Ahn does not support his son’s decision.

“Even if my son does make the national team, if changes do not take place within the KSU, I want him to compete for another national team,” said Ahn Ki-won.