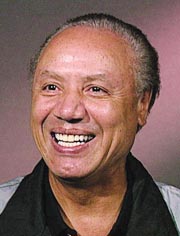 The governing body of Korean basketball said yesterday it has recruited American legend Lenny Wilkens as an adviser for the country’s national squad ahead of the Asian Games in November.

A committee for the national team announced, “We reached a settlement with Wilkens in cooperation with the U.S. National Basketball Association.”

Wilkens will join the team next week and take part in selecting players. He will advise the squad at training camp and at Asian Games matches. The Games are scheduled to open Nov. 12 in Guangzhou, China.

The Korea Basketball Association is expected to complete its roster after the Korean Basketball League Finals conclude next week.

Wilkens, 73, holds the NBA’s win-loss record with 1,322 wins and 1,155 losses in a coaching career spanning 32 seasons. Don Nelson of the Golden State Warriors tied his record yesterday. The nine-time All-Star was twice inducted into the Basketball Hall of Fame, as a player in 1989 and as a coach in 1998, and he was named one of the 50 Greatest Players in NBA History in 1996.

He will be the first foreign technical adviser for the national basketball team, which finished seventh at the eight-team Asian Basketball Championships in August.