Flying high on the cover art of Roger Dean

Flying high on the cover art of Roger Dean 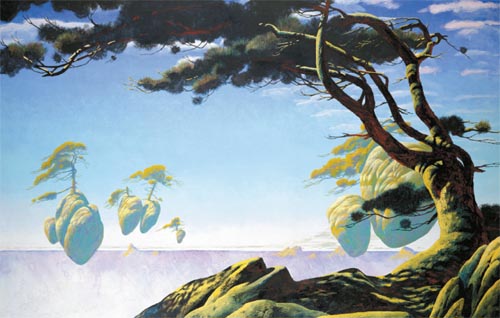 “Floating Islands” (1969) is a mixed-media painting Roger Dean created for the album “An Evening of Yes Music Plus,” by the rock band Yes. Provided by Daelim Contemporary Art Museum

A painting by Roger Dean, an artist famous for his album covers, features rocks with Asian-style pine trees. The trees and rocks are depicted realistically, but they are floating in the air.

A dragon flies through high-rising rocks at dawn in another painting by the artist, now 65. It has the head of an Asian dragon but it also has wings, which do not traditionally belong to Asian dragons but to European ones.

For over four decades, Dean has mixed reality with fantasy, and elements of the East with the West in his paintings. The mixing of cultures comes in part from his own background: He is an Englishman by birth, but spent much of his childhood moving around the world, including Hong Kong.

Such characteristics can be observed at Dean’s first retrospective in Korea, “Dragon’s Dream,” which is being held at the Daelim Contemporary Art Museum in central Seoul until June 6.

A 1971 mixed-media painting by Roger Dean for the cover of the self-titled album by the Afro-pop band Osibisa. Provided by Daelim Contemporary Art Museum

The retrospective features vivid paintings and some of his more famous album cover illustrations.

Dean made his album art debut in 1968 with a cover he designed for the rock band Gun. He began in 1971 to work for the well-known progressive rock band Yes. He has continued to create covers for that band, while also working for other rock bands including Uriah Heep and Asia.

The retrospective shows the original paintings Dean used to create his most well-known album covers for Yes and other bands. These are done in watercolor, gouache and mixed media and are shown on large canvases.

The gallery said in a statement, “Dean persists in hand painting his works instead of using computer graphics, which are favored by cover artists these days. His works now sell for more than $2.5 million each.”

With the advent of MP3 players in the 2000s, album cover art is becoming increasingly invisible. When Dean was producing some of his most memorable covers in the 1970s and ’80s, however, albums came in large record sleeves that were 10 or 12 inches square, a sizeable canvas for an artist like himself.

Dean is often categorized as a fantasy artist, because of the surreal scenes that appear in many of his works. But at a press meeting in Seoul late last month, he said, “I essentially paint landscapes ... I paint what I see.”

He said that even the floating rocks in the painting for the Yes album are based on reality. And when he climbed to the top of a mountain and looked down on the rocks, surrounded with mist and clouds, he said they looked just like islands floating in the sky.

“I don’t think my works fit into the tradition of fantasy art,” he added. He pointed out that although he frequently paints dragons and creatures of his own imagination such as elephants with butterfly wings, they differ greatly from traditional fantastical creatures.

Dean said he attaches great importance to nature in making his works. He wants to express “the feelings I have when I walk through a forest” in his paintings, he told reporters.

The museum said in a statement that Dean’s works have been quite influential in pop culture over the years. Fans of the artist worldwide have pointed out many similarities between his paintings and the visuals in the blockbuster “Avatar.” Dean did not participate in making the film, and is said to be preparing a lawsuit against Avatar’s creators for taking his images without consulting him, including the floating islands that closely resemble the film’s Hallelujah Mountain.

Dean told reporters that he could not speak on the matter, as it is a legal issue, but was “just grateful to the people who recognize the similarities.” Millions of the artists’ fans have raised the issue on their blogs.