A life of sacrifice for ‘Kim Yu-na kids’ and parents

A life of sacrifice for ‘Kim Yu-na kids’ and parents

After skating star Kim Yu-na’s glorious win at the 2010 Vancouver Olympics, figure skating fever seized the nation, particularly among young children who look up to Kim - and, more importantly, parents hoping to raise the “next Kim Yu-na.”

“The topic of conversation these days among mothers who have girls my daughter’s age is whether she skates or not. It seems that mothers whose kids haven’t yet started to learn how to skate feel alienated,” said Shon Hye-eun, 33, whose 7-year-old daughter was out on the rink.

In fact, the kids started coming “about two years ago when Kim began to stand out at international skating events, and it reached a climax during the Vancouver Olympics,” said Yeo Seung-hee, director at the National Skating Association of Sport for All, who also serves as a figure skating instructor at the Lotte World facility.

Currently, some 80 children are enrolled in skating classes at Lotte World, more than double the number of students a year ago, Yeo said.

Korean parental zeal for their children’s sports education is nothing new. After golfer Pak Se-ri won her impressive victory at the LPGA U.S. Women’s Open in 1998, word spread that it was her father’s aggressive training and involvement in every aspect of his daughter’s care since she was very young that led to her success. A slew of Korean parents soon rushed to follow in the footsteps of Pak’s father.

“The phenomenon is a complex product of the tendency for Koreans to get on bandwagons easily when something or someone receives much outside recognition - for example, athletes who win international competitions - and Korean parents’ overzealous enthusiasm for educating their children,” said Chung Hee-joon, a professor in the department of sports and leisure at Dong-A University.

“In fact, she used to do ballet as a hobby,” Shon back at the rink said of her daughter. “Kim Yu-na’s achievement at the Vancouver Olympics caused us to encourage her to shift to figure skating from ballet.” 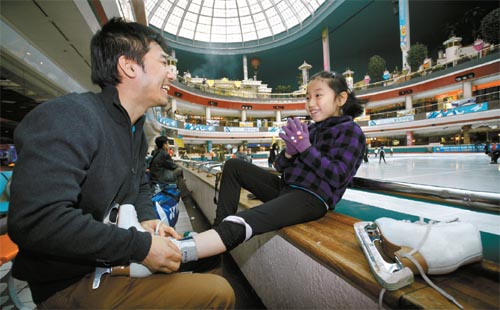 Park Seung-kyu, left, helps his daughter Ga-eun with her skates at the ice rink inside Lotte World. By Oh Sang-min

Professor Chung explained, “In part, it is the parents’ desire for their children’s success, which is conspicuous in Korea. When their children succeed, the parents tend to feel that they have succeeded as well, and the success means a sort of honor for the family.”

After Pak’s success, scores of Korean parents signed their children up for golf lessons, giving birth to an entire generation of Korean golfers known as “the Pak Se-ri kids,” including Shin Ji-yai, now one of the top female golfers in the world. Shin’s father is also known for his energetic support for his daughter.

“What is noteworthy is that the phenomenon triggered by Pak Se-ri became formalized in the late 1990s when Korea reached a certain level of success in terms of economic development,” Chung said.

“It was from that time that athletes advancing abroad increased in number and the country’s pop culture started to boom with the appearance of so-called ‘idol groups’.

“The number of acceptable gateways to success diversified in Korean society, from being good at one’s studies in the past to also doing well in other areas, such as sports or entertainment.”

Parents’ single-minded devotion to their children often leads them to disregard what the kids themselves think or want, and that behavior ought to be restrained, Chung said. The parents gathered at Lotte World said their children really did want to skate, but confessed that they’d also encouraged them to do so.

“I transferred Bo-min to a kindergarten attached to an elementary school that ends earlier than other kindergartens, so that she can take skating lessons here in the afternoon three times a week,” Shon said, adding that she also had to sacrifice an English-speaking kindergarten class to allow her daughter to skate.

“I come here every day with my daughter, who has taken skating lessons here since August last year,” said Park Seung-kyu, 42, looking on with pride as his 9-year-old daughter performed a spin on the ice.

“While we were watching Kim give such a wonderful performance at last year’s World Figure Skating Championships on television, I asked Ga-eun whether she ever wanted to skate and she said yes - that’s where it all began,” Park recalled. 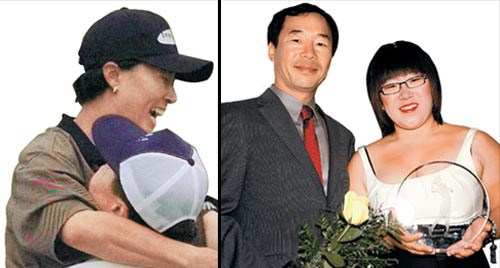 Left, Pak Se-ri’s father lifts the golfer up after she won the 1998 U.S. Women’s Open, which would inspire kids like Shin Ji-yai, right, now an acclaimed golfer in her own right. [JoongAng Ilbo]

To find the right place for his daughter to skate, Park embarked on a tour of well-known ice rinks in and around Seoul, including facilities in Mok-dong, western Seoul; Gwacheon, Gyeonggi; and even the Korea National Training Center in Gongneung-dong, northern Seoul.

“I also got a pair of skates to try it myself and see what it is like to skate. I’d never skated before in my life,” said Park.

“I often get asked why her dad is here instead of her mom, but it’s not that I’m overly aggressive about my child’s education or something,” he continued. “My wife and I run a small business on our own. She takes care of it during the day and I take over at night. That is why I’m here now at this hour in the daytime.”

According to Park, Ga-eun’s daily life now revolves around skating. Every weekday, after the second grader returns home from school around 1 p.m., her father takes her to the rink, where she takes lessons along with other kids around her age from 3 to 4 p.m., following a one-hour warm-up session consisting of running, walking up and down stairs and jumping rope.

Park said the daily lessons and rink rental for private help once a week cost about 1 million won ($876) a month. Since most ice rinks in Seoul are open to the public and there is no Korean rink reserved exclusively for figure skaters, little trainees need to rent out time on the ice early in the morning or late at night to focus on practice without being disturbed, Park explained, adding that he always sticks with his daughter at the unusual hours.

While it’s still too early to tell if his daughter has the potential to go pro, Park said he is aware that it will not be easy to support her if she embarks on a long journey similar to Kim Yu-na’s.

“If a child decides to skate as an athlete, he or she needs to take other additional lessons like ballet and rhythmic gymnastics. The cost adds up to 2 to 3 million won a month,” said Park.

“They say that it usually takes about 10 years for a child like Ga-eun to grow into a skating athlete like Kim, and I once calculated how much it would cost all the way - the total amount was about 500 million won.

“I can afford the expense of teaching my daughter skating for now, but we will be faced with financial problems if she decides to be an athlete. Now I don’t see any option other than doing my best to earn more money while I also consider getting a loan to support her if necessary,” Park said.

Shon echoes the financial concerns. “I heard that there is also an overseas training course that takes children to countries like Canada and Russia for an intensive program for about a month during the summer or winter vacation, and it costs about 20 to 30 million won at a time to cover airfare, travel expenses and fees for lessons conducted by foreign coaches,” she said.

According to Shon, the mothers who accompany their children to the rink for skating lessons every day are always gathering and exchanging information. “I heard that some mothers even make their kids’ skating outfits themselves to save money, as a proper outfit is generally as much as 300,000 won,” Shon said. “I’m concerned that raising my daughter as a skater will cost far more than we can afford.”

While she and her husband are still watching to see whether their daughter has the makings of a first-rate athlete like Kim Yu-na, Shon said the situation is complicated by more than just money.

“My husband and I actually had a plan to have a second child, but changed our mind when our daughter began to skate. I’m well aware that it would cost a lot of time and money to raise a skating child, and that is why we decided not to have another child for the time being, and instead, to focus our resources on supporting Bo-min,” Shon said.

She joked, “Kim Yu-na even affects our family planning.”

Shon is even thinking of giving up on her own career to help her daughter.

“I initially planned to return to work after a break of several years, but now I’m reconsidering it since I may have to tend to my daughter all day long if she skates as an athlete,” she said.

“The other day I read the memoir written by Park Mi-hee, Kim Yu-na’s mother, in which she wrote that she devoted her life to her daughter. I wondered if I could do as Park did,” Shon said. “But if my daughter has a chance to be a good skater and she really wants to do it, I think I will do it anyway.”

Not all experts see this energy as something to be held back. “Korean parents’ overzealous enthusiasm for educating their children, which prevails in Korean society, has had a positive effect by serving as a driving force for the country’s development across various fields,” said Won Young-shin, a professor of sports and leisure studies at Yonsei University.

Won argued that parental support and dedication are crucial for athletes to succeed - but that this isn’t limited to sports.

“This also applies to other areas like the art world. Even if a child has a talent for music, say playing the violin, he or she cannot blossom into a violin virtuoso without the economic and emotional support of the parents,” the professor said.

“However, it is not desirable to go to extremes in any case, while some extreme cases are often found in Korea as we see so-called ‘goose fathers’ - men who stay behind to support their families, who go abroad for their children’s education,” she added.

Korea’s obsession with rankings, in which everyone is pressured to reach for the absolute top, is problematic, Won said.