Back on the course, Woods warms to fans

Back on the course, Woods warms to fans

Tiger Woods and the surrounding gallery follow his tee shot on the 15th hole during a practice round for the Masters golf tournament in Augusta, Georgia, April 5. [AP/YONHAP]

AUGUSTA, Georgia - While acknowledging he made some “incredibly poor decisions” in his personal life, Tiger Woods still thinks he can win the Masters - even coming back from a five-month layoff.

“Nothing’s changed,” Woods said Monday during an extraordinary 35-minute news conference at Augusta National. “I’m going to go out there and try to win this thing.”

In his first full-fledged session with the media since his life fell apart, Woods entered the interview room with a smile on his face and stopped to hug one of the green-jacketed club members, Ron Townsend.

Woods again took full blame for his personal failings, but stopped short of providing many new details. He wouldn’t say why he entered rehab for 45 days nor would he go into specifics about his infamous Thanksgiving night car crash, other than to say it took five stitches to close a lip wound.

“All I know is I acted just terribly,” said Woods, sporting the makings of a goatee. “I just made some incredibly bad decisions, decisions that hurt so many people close to me.”

He said his wife, Elin, would not be at Augusta. The couple’s marriage has been in limbo since revelations that he had multiple extramarital affairs during their 5-year marriage.

Woods thanked his fellow golfers for the support he’s received since announcing his return to the PGA Tour and said he was pleasantly surprised by how well the fans treated him during a practice round Monday. The outing was his first before a gallery since the sex scandal made him a tawdry tabloid fixture. He even flashed a bit of uncharacteristic charm, stopping to sign autographs - something he rarely does - while heading to the practice range to get in a few extra swings.

“The encouragement I got, it blew me away,” he said. “It really did. The people here over the years, I know they’ve been extremely respectful. But today is just something that touched my heart pretty good.” 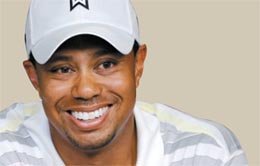 During the news conference, Woods said:

- He plans to tone down his reactions, good and bad, on the course, and hopes to interact more with his fans during practice rounds.

- He “followed the letter of the law” after slamming his car into a fire hydrant and a tree outside his home, including not talking to police investigators.

In New York, adult film star Joslyn James, one of more than a dozen women who claims to have had an affair with Woods, watched the golfer’s news conference with her attorney, Gloria Allred, and a room full of reporters and television cameras at the Friar’s Club.

James has asked for an apology from Woods, saying he had not been truthful to her during their three-year relationship. “I think he’s still a big, fat liar,” she said.

As for Woods’ assertion that he gained perspective after the birth of his two children, James claimed the golfer was with her 10 days after his daughter was born. To his insistence that the last few years of deception were no fun, she said, “He was having a good time from what he told me.”

Woods has won 82 times around the world, including 14 major titles, but he speculated that he might have been even more successful if he had shown more control in his personal life.

“I would like to say yes,” Woods said. “I would be more centered, more balanced, and that’s where I’m headed towards. That’s what I’m working towards each and every day.”

Woods acknowledged reports that he was prescribed two drugs: the sleep aid Ambien and the painkiller Vicodin, the latter to deal with four knee operations and an Achilles’ injury.

“Most of the time I was on the Ambien was when my dad was sick and when my dad died. That was a tough time in my life,” he said. “I was still taking some of those things to help me sleep.”

Woods said he’s never received treatment for either drug, but wasn’t forthcoming when asked if Ambien played a role in his car crash.

“The police investigated the accident and they cited me 166 bucks and it’s a closed case,” he said.

“He’s worked with so many athletes,” Woods said. “There’s a certain comfort level to that when a person has worked with athletes.”

During his practice round, Woods heard shouts such as “Welcome back, Tiger!” and “Go get ’em, Tiger!” There were no boos, though the applause when he approached each green was a bit more tepid than he received in previous appearances at Augusta National.

Still, it was a solid start in the process of restoring his image with fans and sponsors. Woods clearly was intent on mingling more with the fans than he did before the scandal. First, he putted a couple of balls to some kids watching alongside the 18th green. Then, a real surprise: Woods stopped to sign autographs while heading to the practice range.

Ashley Hawkins was beaming as she showed off an Augusta National flag that Woods signed. The golfer can only hope that most fans feel the way she does.

“I’m excited that he’s here,” Hawkins said. “I’m really rooting for him to win. His personal life is his personal life. I still think he’s a great golfer. That’s all that matters.”

Several big-name sponsors dropped Woods, while Procter & Gamble’s Gillette unit distanced itself from the golfer by no longer including him in its ads. But the company said in a statement Monday that it looks forward to seeing Woods return to the course.

John Sweeney, director of sports communication at the University of North Carolina’s School of Journalism and Mass Communication, said the news conference did little to help or hurt Woods’ marketability and is unlikely to change the minds of the companies that dropped him, including Accenture and Gatorade.

“He’s doing some proper things to repair an incredibly damaged legacy, but it’s going to take a couple of years here,” Sweeney said.

Woods, who practiced with Fred Couples and was joined for the final five holes by Jim Furyk, said he felt at peace when he stepped on the course.

“I’ve had some great years,” Woods said. “Unfortunately, what I’ve done over the past years to my family was just terrible. The fact that I won golf tournaments is irrelevant.”

Couples said it might be too soon to expect Woods to be a contender in the first major of the year.

“If he’s in the lead on Sunday, he’ll have no problem. If he’s not, he’ll say, ‘Here’s what I need to work on. I came out, I played, I saw everybody and now I’m ready to start golfing.’”

Win or lose, Woods is clearly thrilled to be back on the course.