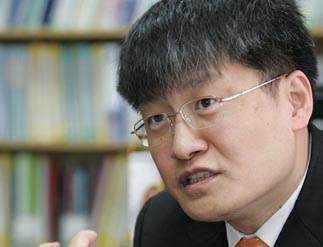 The setting up of a Korean branch of the Max Planck Institute, the famed German science research center, could represent a significant advance in the scientific capability of Korea, according to Kim Seung-hwan, a physics professor at Pohang University of Science and Technology, or Postech.

Kim, 51, will be in charge of supervising the establishment of the branch facility, which is scheduled to open later this year.

There are nearly 80 Max Planck institutes, most of them in Germany, that are affiliated with the parent Max Planck Society for the Advancement of Science.

The society was named after the famous German physicist who founded the quantum theory and was awarded the Nobel Prize in Physics in 1918.

The Max Planck Institute and its predecessor, the Kaiser Wilhelm Society, has produced 32 Nobel winners in various scientific fields.

“If the excellent Max Planck Institute system can be established in Korea, it will open the door for Korean scientists to win a Nobel Prize,” said Kim at the Asia Pacific Center for Theoretical Physics, located at Postech’s campus in Pohang, North Gyeongsang.

The agreement to set up a research facility with the Max Planck Society was announced last month. Plans call for an expansion of the research institute by 2015.

It would be the first such Max Planck Institute in Asia and only the second outside Europe following the recent establishment of one in the United States.

The JoongAng Ilbo interviewed Kim to discuss the implications of the of the institute for Korea’s scientific future.

Q. What will be the operations of the Max Planck Institute in Korea?

A. Postech and the Max Planck Society will set up a material sciences research center consisting of 200 doctorate-level researchers by 2015. Before then, we will start two research centers from this July for attosecond spectroscopy study and complex phase materials research. These are new research fields for the Max Planck Institutes.

What is attosecond spectroscopy research?

What do you think makes the Max Planck Institute the world’s best in basic science?

The research [at Max Planck] is conducted in an independent manner with lots of freedom. Instead of going for experienced scholars, the institute prefers young researchers, so many of its head researchers are between the ages of 35 to 45. It is a “dream” research institute for scientists by scientists. It differs from local research centers which focus on applied research to gain fast, short-term results for specific projects.

What will be the significance of Korea having a Max Planck Institute?

In terms of material science, Korea is well regarded at an international scale. In the past, India, Canada and Argentina wanted to open such a center in their own countries. Having a Max Planck Institute in Korea will mean that Korea’s basic science sector will come to the forefront. Korea’s expertise in applied sciences for industrialization is recognized, but the quality of basic science research is still lagging behind, although the number of Science Citation Index-level theses has increased.

Why did the Max Planck Society decide to set up an institute in Korea?

The role of Peter Fulde, Postech physics professor and director of our Asia Pacific Center for Theoretical Physics, was crucial. Fulde came to Postech from the Max Planck Institute in April 2007, at the invitation of the former president of Postech, Park Chan-mo. Professor Fulde works in Korea for four months out of the year. As soon as he arrived in Korea, he created a “junior research group” for young researchers and asked the Max Planck Institute for support. That year, Peter Gruss, president of Max Planck Society’s Munich headquarters, came to Korea and after looking around Postech, received a favorable impression.

Postech is located in a quiet regional area and has state-of-the-art facilities, including a synchrotron radiation center and nano-process center, near the college campus here. More importantly, it was the attitude of the young researchers at Postech that won him over. He described the researchers here as “having soul.”

In the end, Gruss decided to sign a deal investing 1.5 million euros ($2.01 million) over five years for the junior research group. He also selected Postech as a possible site for the Max Planck Institute. From then on, Postech tried hard to make this happen. The following year in July, a committee to lobby for the creation of a Max Planck Institute in Korea was set up, with Kim Kwan-yong, governor of North Gyeongsang, heading it.

Japan has seen a lot of Nobel Prize winners in science.

Japan has won 13 Nobel Prizes in science, while Korea has none. Japan is seen as having 100 scientists who might qualify for a Nobel Prize. In Korea, this might not happen for awhile. Korea doesn’t even have a scientist who has won a Lasker Award or the Wolf Prize, considered a step below that of the Nobel Prize.

Riken, a large Japanese natural sciences research institute, was established in 1917 and it was similar to the Kaiser Wilhelm Institute. Japan’s basic sciences research system has largely been based on that of Germany.

In Korea, there is a national desire for a Nobel Prize in science.

There is a great hunger for one. But I’m reminded of the saying that one should go slow especially when you are in a hurry. The Max Planck Institute would also like to see one of its foreign branches win a Nobel Prize for the first time as well. Our aim is to support the best research possible.