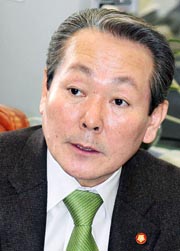 Kim met with reporters Monday afternoon and discussed the March 26 sinking of the Navy corvette Cheonan after he received personal briefings from the Defense Ministry and the Joint Chiefs of Staff. Kim gave reporters detailed information he had obtained from the military, linking the Cheonan’s sinking to a possible torpedo or mine attack.

His revelations prompted concerns that the release of confidential military information could lay bare American and South Korean methods of gathering intelligence on the North.

The Defense Ministry said yesterday that firm measures will be put in place to prevent the release of sensitive information.

“Recently, some leaders of society were thoughtless enough to expose crucial military secrets on intelligence-gathering methods, such as Navy ships’ communications logs and the operation of thermal observation devices, as well as other information such as the Navy’s weapons system and the inside plan of a warship,” said Won Tae-jae, ministry spokesman. “We are extremely concerned about it, and we will sternly and fully counter such leaks.

“Military secrets are necessary to successfully conduct operations and protect our soldiers’ lives in times of emergency,” he said. “They are not only the secrets of the military, but also the secrets of all this nation’s people.”

Won said a joint investigation team of military and civilian experts will do its best to transparently explain the situation to the public, while keeping sensitive information confidential.

Other government officials joined the censure. At the Blue House, presidential spokesman Park Sun-kyoo said yesterday, “This is a national security crisis, but more and more confidential military information was leaked from the National Assembly. Some of the unconfirmed information spread recklessly.”

Won Sei-hoon, the head of the National Intelligence Service, told the National Assembly’s Intelligence Committee, “When high-resolution [satellite] images provided by the United States are revealed, our relationship with the U.S. and bilateral trust can be damaged. We urge lawmakers to refrain from revealing military confidences.”

Democratic Party Representative Ooh Che-chang condemned Kim for “fueling the confusion among the public” rather than stopping speculation.

“Kim received personal briefings from the Defense Ministry and then briefed reporters, acting as if he were the spokesman of the ministry,” Ooh said.

On Monday, Kim told reporters the South lost track of two North Korean submarines between March 24 and 27, though the military does not believe their movements were related to the explosion that sank the Cheonan.

Kim went into details, saying that other 300-ton shark-class North Korean submarines were spotted six times on March 23, three times the next day and once on March 26 near the North’s Bipa Cape. He added that no unusual movement of the North’s semi-submersibles was detected.

“We cannot say for sure if the submarines crossed the inter-Korean border,” Kim said. “Two of them were on the move, and one’s location was once confirmed based on intercepted communication, but the other’s whereabouts were unknown.”

The National Assembly’s Intelligence Committee said yesterday there was no abnormal activity in the North when the Cheonan sank.

Kim also released details about the condition of the Cheonan.

Kim told the JoongAng Ilbo yesterday that he was aware of the sensitivity of the information that he had provided. However, he said the North’s submarine activities had been discussed by Defense Minister Kim Tae-young before the National Assembly last week, and he had no choice but to elaborate to stop suspicions from growing.