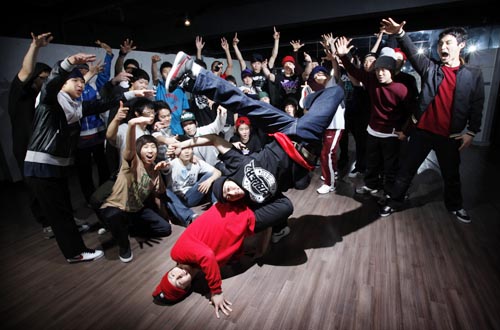 It’s a school night like any other, and a group of boys aged 15 to 17 gathers in a basement studio near Yangjae Station, southern Seoul. But they’re not here to study, or even for a party - these boys are here to dance.

Dressed in loose T-shirts and baggy jeans, they break into various acrobatic moves to thunderous beats, plunging into head spins, catching themselves with their hands in flares, posing in exotic positions. As the hours pass, they’re soon soaked in sweat.

These teenagers are aspiring B-boys - or break-dancers. The movement known as breaking evolved among black and Latino youths in the South Bronx in the 1970s, and is widely recognized for its highly acrobatic, powerful moves and complex footwork.

“I practice three to four hours every day,” says Park Chan-won, 17. “To me, dancing is studying.”

Though it originated far from here, Korea is considered a powerhouse of the form, consistently producing the world’s best breaking groups, according to Professor Bae Jung-in at Seoul Art College. In fact, he estimates the current number of Korean B-boy groups - amateur and professional - at over 1,000.

Despite this international presence, break dancing has yet to enter the mainstream in Korean society like conventional hip-hop and jazz. “Before, I didn’t have any teachers or practice rooms, so I used to search for empty rooms at the youth center near my home to practice,” said Lee Jung-su, 16. That was before he discovered U.V. Studio, the first Korean break dancing academy, located in this modest space in southern Seoul and founded in 2008 by the Gamblerz crew. 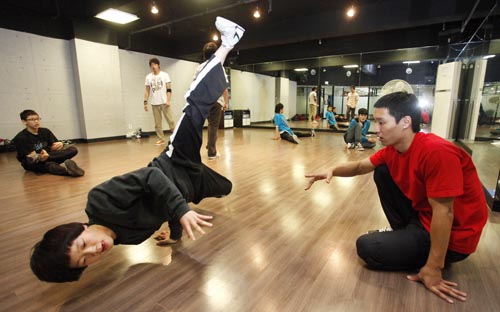 Formed in 2002, the crew lays claim to many impressive wins, including at the world’s most prestigious B-boy competition, the Battle of the Year, in 2004 and 2009. Two years ago, the crew established U.V. Studio to support not only its own development, but also budding breakers like Park and Lee. In fact, to these students, the Gamblerz studio is more than just a practice ground - it’s a place to receive invaluable advice from Gamblerz members.

“I first began breaking when my teacher recommended I find a hobby to let go of academic stress,” said Park. Little did he know that hobby would turn into something much more. Now, at the age of 17, when most of his peers still haven’t figured out what to do with their lives, Park is firmly committed to becoming a professional B-boy. Still, there is one major obstacle to overcome: his parents.

“When my parents found out that I was serious about pursuing dancing as a career, they wanted me to quit right away,” said Park. It took a lot of leading, he said, to persuade them to compromise. He now has until the end of his senior year in high school to show his parents how far he can go in the field.

Like his friend Park, Lee also began breaking as a hobby that soon transformed into a passion, and just like Park, Lee’s parents were initially opposed as well.

“Even when my son was dancing just as a hobby, I was worried because of the general stereotypes of B-boys as slackers,” said Lee’s mother, who asked not to be named. “They’d dance instead of studying, and they would always wear oversized clothes .?.?. The last thing I wanted was my son following such a precarious route.” 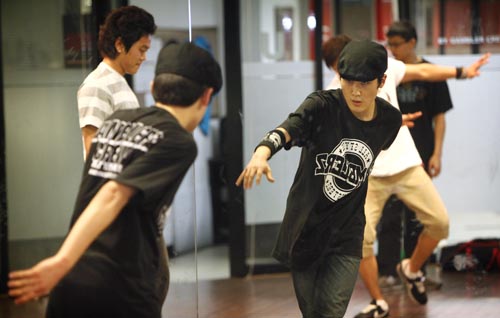 Moon Byung-in faces off against another trainee. By Oh Sang-min

To Gamblerz members who began dancing in middle and high school, family opposition is nothing new. Shin Kyu-sang, a?k?a B-boy Bruce Lee, one of the original members of the crew, remembers never being taken seriously by his parents, even when his crew was traveling to other countries for international competitions. It was only after they began winning major awards, Shin says, that his parents began to regard being a B-boy as his career.

“But even now, they still show feelings of disappointment about what I decided to do with my life,” Shin said.

Park Ji-hoon, a?k?a B-boy Still, another original member, told a similar story. “I think all our parents, if they were not displeased, were completely against it. We didn’t have much support or mentorship. But we were so crazy about B-boying that we weren’t willing to step down.”

To young breakers, every minute with these 20 crew members who stuck to their dreams is a precious learning opportunity. In fact, many have, over the years, formed special bonds with specific members. Park is particularly close to Hong Sung-jin, a?k?a B-boy Pop, from whom he receives weekly lessons. “It is personally rewarding to see him improve,” Hong said of Park. “He reminds me of what I was like when I was his age.”

Lee has worked with Kim Ki-su, a?k?a B-boy Rocket, for more than a year. “When I see Gamblerz members practice, I can feel their passion. From them, I learned to stick to what you truly love to do. I don’t want to spend my life knowing that I gave up something that I am passionate about,” Lee said as he wiped sweat from his forehead.

In 2002, when the members formed the crew, their hopes for global championship were cut short at the Battle of the Year preliminaries. The loss, however, only increased their drive. To Park, the old days when they’d often practice for days, eating nothing but ramen and bread, remain deeply engraved in his memories. 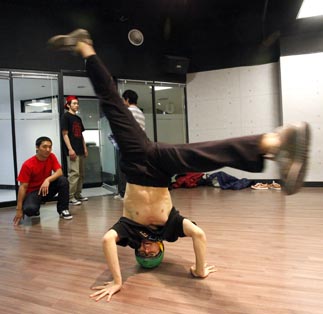 Lee Ju-ha, a student at U.V., performs a handstand. By Oh Sang-min

It was a lonely and difficult path, but their commitment eventually translated into success: a third-place win in the 2003 Battle of the Year, followed by a string of victories. Gamblerz was invited to perform at commercial events and on TV shows, and act as guest judges at Korean B-boy battles. But members still describe opening U.V. Studio as their proudest moment.

“We often get parents who come in to ask for our advice about their children,” says Shin. “Some are completely against it, others are worried about the risks that a B-boy career carries and what kind of future it will be for their children. We try our best to convince them that their passion can lead to success.”

“Many adults don’t perceive break dancing as a legitimate career, because it is a relatively new phenomenon in our society. Many retired breakers are still in their 30s, and maybe 40s, and available jobs in the field, such as running dance companies and producing shows, are very few.”

Breakers’ earning power - or lack thereof - also presents a big roadblock. According to Bae, most B-boy groups bring in revenue from teaching lessons, and even successful B-boys receive very little for their performances, unlike other pop stars. Even when asked to perform in other countries, the pay often is not enough to cover the plane ticket. Lee’s mother, fully aware of the financial problems that are likely to arise, is encouraging her son to pursue directing or performing arts, rather than committing fully to break dancing.

Budding dancers, however, are supremely confident of the path they have chosen to follow. “Without the role models we have right now, break dancing may have just been a temporary passion, or just a hobby. It is encouraging to know that you can be successful following this route,” Park said.

Gamblerz gives private and group lessons at a discount rate but also holds open studios and free sessions where students can interact with members. At times, students are even given a chance to “battle” the pros - a chance for the new kids to gauge their potential.

But beyond the technique, the school offers a supportive social environment, with Gamblerz members acting as older brothers. From his mentor Rocket, Lee Jung-su is learning to develop his own style of dancing.

“Rocket is never afraid to try new moves, and that makes him stand out among so many dancers out there. I am learning to be myself,” Lee said with pride.

Lee Jin-ho, 17, is taking lessons from B-boy Rush. “He teaches me that B-boying is not just dancing but a part of my life. It’s not just about executing difficult moves. Only when I learn to embrace music and moves all together will I be able to become a true B-boy.”