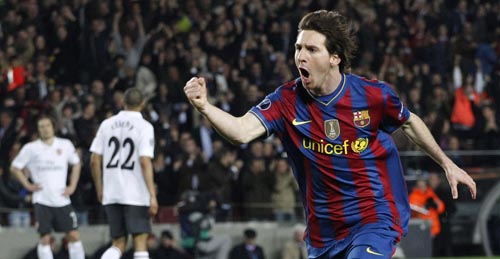 Nicklas Bendtner gave Arsenal hope with his 18th-minute opener, but Messi took over after that at Camp Nou. Messi took advantage of a misplayed ball by Mikael Silvestre to equalize in the 21st and then put the defending champions ahead in the 37th by capping a smart buildup with a shot into the top of goal.

Messi ensured a hat trick from a break in the 42nd by scooping over goalkeeper Manuel Almunia, and scored his 39th of the season with two minutes to play. He is the competition’s top scorer with eight goals.

Arsenal manager Arsene Wenger went with Silvestre to partner Thomas Vermaelen in defense because Sol Campbell had not fully recovered from his weekend league start, while Tomas Rosicky played despite a sore calf with the Gunners already missing attacking midfielders Cesc Fabregas and Andrei Arshavin.

The first 15 minutes looked nothing like those in the first leg when Barcelona blitzed Arsenal’s goal and Almunia held off the visitors. Barcelona enjoyed early chances as Xavi’s backheel flick ran wide in the second minute, and Messi missed several shots.

Arsenal pressed hard as it looked to score from a quick break and take advantage of any errant balls by Marquez and Milito, who was starting a European match for the first time in nearly two years.

The plan paid off after Samir Nasri poked free from Milito and Abou Diaby sent Walcott alone on goal. He passed off to Bendtner, who was streaking alongside to the left. Although Daniel Alves managed to disrupt Bendtner’s initial shot, which was stopped by goalkeeper Victor Valdes, the striker was up quickly to stab his rebound past the Barcelona goalkeeper. Arsenal’s lead was short-lived as Messi took advantage of an error by Silvestre, who played Messi’s poor pass right back to him at the edge of the area. Messi continued his run before curling into the top corner.

Barcelona maintained better possession and that led to several tough challenges by both teams, with Denilson booked after a half hour for tripping Messi, who was more lively following his opener. The visitors were upset in the 33rd when Rosicky put Bendtner alone on Valdes and the referee wrongly whistled offside.

Messi then capped a typical Barcelona buildup - which he had started - as he cut a pass down the left to the streaking Eric Abidal. The back’s centering pass was blocked but landed at the feet of Pedro Rodriguez, who laid it to Messi as he streaked into the area to eventually beat Almunia with a rising shot from his right foot.

The Spanish champions were in complete control with the International Football Association player of the year headed clear on goal by Seydou Keita, and Almunia could do little as Messi coolly guided the ball over the keeper into the open net for his third.

Arsenal enjoyed more possession in the second half with Bendtner trying to lead the Gunners’ rally. But Marquez poked away from him in the 60th, while a header off the post in the 73rd was called back for offside. Just before Rosicky shot a clear chance over, Gael Clichy did the same in the 75th with Walcott in support.

Messi capped his spectacular performance in the 88th as he collected the rebound after Almunia saved his initial shot and sent a shot along the ground and through his legs from close on the left side. Andres Iniesta showed he has overcome a thigh injury and will be available for Saturday’s league match with Real Madrid after replacing Pedro with four minutes to play.

Barcelona may be without Abidal, however, after he came off in the 53rd with an apparent injury.