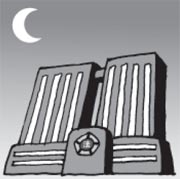 The trial for the murder of President Park Chung Hee in 1979 was one of the fastest Korea has seen. Just 38 days after President Park was assassinated, the first hearing with Kim Jae-gyu, director of the Korea Central Intelligence Agency, and his associates who collaborated with the assassination was held. Except for one short interruption due to an arbitration proposal, the trial was held every day without a break until a verdict was reached.

It was during this trial that the first evening court sessions were held in Korea. The court sometimes didn’t get out until midnight, and everyone seemed anxious for the trial to be finished quickly.

Later, Ahn Dong-il, a lawyer and the author of a book on the assassination trial, revealed that the new military government was pressuring the court to administer swift justice in the trial. Kim Jae-gyu was executed just seven months after the assassination of President Park.

At different times, evening court sessions have been used for important and complicated trials.

Not that long ago, a criminal tribunal that looked into charges that the U.S. private equity fund Lone Star took over shares of Korea Exchange Bank at a dumping price held evening court sessions.

When the trial was proceeding at a snail’s pace due to the scores of witnesses and legal complexities involved, the presiding judge decided that evening sessions were necessary to wrap up the case in a timely manner.

In other countries, evening courts are not rare. In Abu Dhabi, the capital of the United Arab Emirates, they operate evening courts that open after office hours, from 6 p.m. to 9 p.m. They also provide subsidiary services for trials, such as notarization and the issuance of written sentences, during evening hours.

In Canada, the court operates an “express lanes” program to handle small-sum civil suits swiftly. They have even established courts that take exclusive charge of evening justice, like the one at Robson Square in Vancouver.

In Korea, too, the Ansan branch of the Suwon District Court is going to introduce an evening court system this month. In the new system, civil trials will begin at 7 p.m., the time most offices close. As small-sum civil suits that involve less than 2 million won ($1,800) will be handled at the court, it has been called the “evening court for ordinary people.”

In the Small-sum Civil Suit Act revised in 1990, there is a provision that stipulates open court sessions can be held during holidays and evening hours. But the provision has been ignored for almost 20 years.

Like the judges that stay awake in their court chambers through the night, this provision should be awoken from its stupor and provide justice at a convenient time for ordinary people.