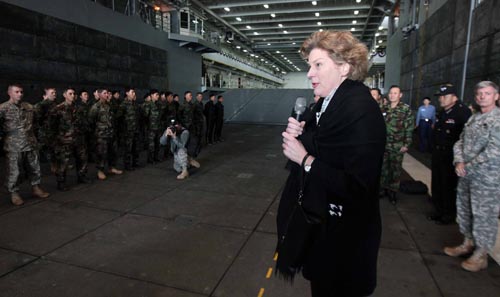 U.S. Ambassador to Korea Kathleen Stephens speaks to Korean and U.S. soldiers aboard the Dokdo near the western sea border in the Yellow Sea yesterday. Her visit with Gen. Walter Sharp, far right, the commander of U.S. Forces Korea, was made to encourage crew members preparing to implement the salvage operation of the Cheonan. [Joint Press Corps]


President Lee Myung-bak said yesterday that foreign experts and the United Nations would join Korean investigators in probing the sinking of the Cheonan last month, in order to ensure a thorough and objective study.

Speaking to members of the Korean Senior Citizens Association at a Blue House luncheon, Lee said halfhearted efforts wouldn’t get the job done.

“Experts from developed nations and the United Nations will together carry out painstaking investigations,” Lee was quoted as saying by the Blue House. “They will come up with findings that no one can ever refute, and the government will take firm measures as necessary.”

“We need to produce scientific and meticulous findings that can be trusted by the international community,” the president said.

On Tuesday, Lee called for a civilian expert to take the helm of the joint investigative team of military and civilian figures probing the cause of the sinking. Currently, Army Lt. Gen. Park Jung-yi is heading the team.

“Investigating the cause of the sinking isn’t just our problem: Group of 20 member states and six-party members are keeping a close tab, too,” Lee was quoted as saying by the Blue House. “That is why we’ve asked for help from international [civilian] experts and they shouldn’t act as second fiddle to anyone.”

Park Sun-kyoo, presidential spokesman, explained that Lee wanted to ensure the government didn’t reach a hasty conclusion without a strong factual base and risk having the international community lose trust in Korea.

Chung Mong-joon, head of the ruling Grand National Party, hailed Lee’s order as an “appropriate step.” Even the main opposition leader, Chung Sye-kyun of the Democratic Party, acknowledged it was the right move.

Military officials have come under fire during the investigation for their inability to determine the exact time of the incident and for leaking confidential intelligence to a legislator.