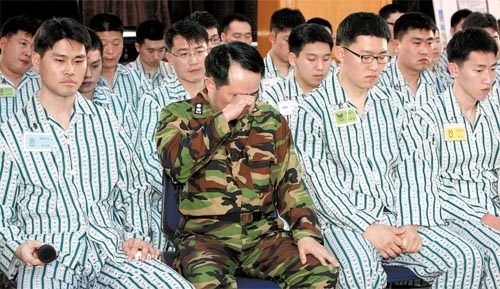 Survivors of the Navy corvette Cheonan address the media yesterday at the Armed Forces Capital Hospital in Seongnam, Gyeonggi. It was their first public appearance since the tragedy that took place on the night of March 26. Among 104 crew members on board, 58, including the captain, were rescued. [Joint Press Corps]


A second body was found in the sunken naval ship Cheonan yesterday, as officials were preparing to salvage the damaged vessel.

The body of Senior Chief Petty Officer Kim Tae-seok, 37, was recovered from the rear portion of the 1,200-ton Navy corvette, the Korean military said yesterday. The vessel went down on March 26 in a mysterious blast off the peninsula’s west coast.

Divers found the body around 4 p.m. during a salvage operation.

Kim was promoted posthumously to his current rank on April 1. He had been slated for promotion and the Navy made an exception of a personnel rule that promotions are withheld from missing servicemen.

Kim joined the Navy in August 1993. His body was flown to the Second Naval Fleet in Pyeongtaek, Gyeonggi.

Of 104 sailors aboard the Cheonan, 58 were rescued and 44 remain missing. The body of Senior Chief Petty Officer Nam Ki-hoon was recovered inside the petty officers’ mess hall in the stern last Saturday.

Missing crew members are believed to have been trapped inside the stern of the sunken ship.

On Sunday, families of the missing sailors asked the Navy to halt its underwater search for bodies and instead to recover the ship. The families said they didn’t want to risk the death of another rescuer.

The search took the life of a military diver, who lost consciousness and died after participating in the lengthy underwater operations last week.

Earlier yesterday, most of the 58 survivors made their first appearance together at the Armed Forces Capital Hospital in Seongnam, Gyeonggi. 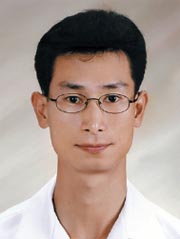 However, a scheduled meeting with families of their missing comrades was postponed.

Navy officials said the families had asked to postpone the meeting so they could prepare for it.

Surviving mothers pleaded Tuesday that they meet with the survivors so that they could hear about how their sons spent their final hours before the explosion.

Wearing grim, distant looks as they addressed the media, the Cheonan survivors said they twice heard deafening sounds of explosion but smelled no gunpowder at the time of the unexplained blast, and the rear end of the Cheonan sank out of sight within a minute.

Among the 58 rescued, 57 men attended the press conference.

One sailor did not attend because of a back injury.

The sailors were dressed in hospital gowns. Some came in wheelchairs, and others wore therapeutic braces.

Survivors said nothing was out of the ordinary on the night of the sinking, adding to the mystery of the sudden blast.

It has not been determined if the Cheonan was sunk by a torpedo, sea mine, an internal explosion or a malfunction of the ship. Senior Chief Petty Officer Oh Sung-tak said he felt his body lifted into the air immediately after the explosion and found the ship had tilted at about 90 degrees.

“I found the exit from the compartment, which is normally located on my right, underneath my feet,” Oh said.

“I groped for the exit for about 15 minutes, thinking of my family and how I must live through this. I believe the explosion was likely caused from an external factor rather than an internal one.”

Heo Sun-haeng, another senior chief petty officer, who was one of the last survivors to make a personal phone call before the explosion, shared the contents of his emotional conversation with his pregnant wife and young daughter.

“I told my daughter she had to help Mommy out because Daddy’s not there. I heard the blast minutes later,” Heo said, adding that his phone conversation lasted from 9:14 to 9:18 p.m.

Before the survivors’ press conference, the military unveiled additional recorded footage from a thermal observation device that showed the bow and the stern split in two following the explosion and the rear part sinking.

According to the latest findings, the Cheonan disappeared from the Navy radar at 9:21:57 p.m.

Since the incident, the Ministry of National Defense had been unable to determine the exact time that the ship went down. It had offered anywhere from 9:25 to 9:45 p.m.

Last Thursday, the military released a 40-minute-long clip from the thermal observation device that displayed only the bow floating on water from 9:23:46 p.m. It said at the time that there was no additional footage.