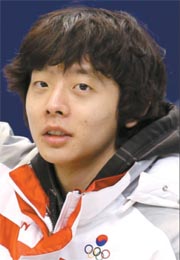 Olympic gold medalist Lee Jung-su admitted he withdrew from the World Short-Track Speed Skating Championships last month not because of an ankle injury but because of pressure from national team coach Chun Jae-mok.

During an investigation of the incident by the Korean Olympic Committee, which concluded yesterday, Lee and fellow skater Kim Sung-il of Dankook University testified that Chun told them to pull out and actually dictated their letter of withdrawal.

“Due to pressure from national team coach Chun Jae-mok, we wrote the handwritten withdrawal document as Chun read out the contents,” Lee and Kim were quoted as saying by the KOC.

Chun disagreed with the skaters in his own testimony to the KOC.

“The athletes made the decision to pull out of the championships on their own. I merely told them what to write on that document,” stated Chun.

Last month, Ahn Ki-won, the father of fellow skater Ahn Hyun-soo, charged that Lee had been deliberately left off the team for the 2010 World Short-Track Speed Skating Championships in Sofia, Bulgaria, in order to give favorites of the Korea Skating Union brass a shot at winning.

Lee, a two-time gold medalist at the 2010 Vancouver Olympics, was initially said to have pulled out because of an ankle injury.

If the second round of investigation by the KSU is found to be lacking or doesn’t proceed, criminal charges could result, the KOC said.

Previously, it was believed the two KSU vice presidents had a strong influence over such matters, but according to the KOC, it’s still unclear whether the top officials of the KSU were involved or the coaches acted on their own.

“Lee stated to us, he believed top officials of the KSU were involved in the decision to drop him from the World Championships but we have no conclusive evidence at this point that can support Lee’s claim,” said a KOC official.

Chun may have ordered Lee and Kim to pull out in order to give skater Kwak Yoon-gy, who was trained by Chun, an opportunity to win medals at the championships, the KOC statement said.

In addition, several coaches and skaters are believed to have reached a race-fixing agreement at national tryouts in late April at the National Training Center in Taeneung, northern Seoul, the KOC said. Those involved are alleged to have agreed to help each other get onto the national team, and then take turns winning medals at international tournaments which included individual championships.

The KOC has ordered the KSU to further investigate the matter by reviewing the national tryout video clips and to look into ways to prevent such matters from taking place again.