Just one step away from the title

Just one step away from the title 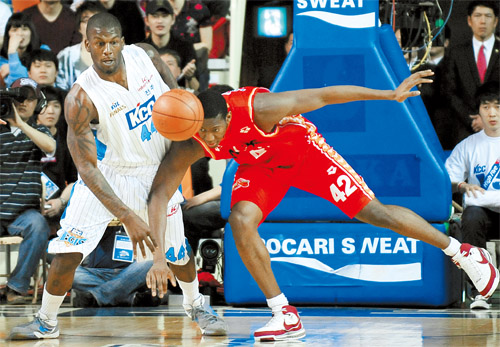 Ivan Johnson, left, of KCC Egis battles for possession with Bryant Dunston of Mobis Phoebus in game four of the KBL Finals on Wednesday night in Jeonju, North Jeolla. [NEWSIS]

The Mobis Phoebus are one game closer to the clinching the Korean Basketball League Finals. With a 90-87 win in game four of the best-of-seven series in Jeonju, North Jeolla, Wednesday night, Mobis are now just a match away from winning the league title as the series shifts to Jamsil, southern Seoul, tonight.

As they battle with KCC Egis, the big question is whether KCC’s star center, Ha Seung-jin, will make an appearance in game five. Ha has missed the entire postseason with a nagging calf injury which he sustained during the All-Star weekend in late January.

Without a formidable presence down the middle, KCC managed to defeat the Samsung Thunders in the first round and KT Sonic Boom in the semifinals, but it’s clear that they don’t stack up well against the Mobis squad, which boasts the regular season’s Most Valuable Player in Ham Ji-hoon.

The third-year forward has caused KCC all kinds of trouble in the finals. In the first two games, Ham scored 26 and 25 points respectively as Mobis jumped to a two-game lead in the series, winning both the games on their home court. KCC contained Ham by limiting him to 10 points and won game three, but it was their sole success.

In response, Mobis utilized perimeter shooting from their backcourt as Ham was once again limited to 12 points in the game.

KCC desperately tried to climb back during the late stages of game four, but Mobis grabbed key rebounds on KCC’s missed shots. The numbers show Mobis’ dominance in the low post as the team grabbed 30 rebounds compared to KCC’s 18.

“I will look into using Ha in game five. But I think it’s the right decision to go with the current lineup,” KCC head coach Hur Jae said in a post-game interview.

“If Ha aggravates his injury by playing in the game, it’s bad for his career and just as bad for the team. And there’s no guarantee that Ha’s return will boost the lineup.”

“Johnson gave me the finger,” said an irate Yoo in a post-game interview. “The referees said they saw it, so I’ll leave the matter with the Korean Basketball League and wait for a proper reprimand.

“A player who behaves like that toward a coach does not deserve to be a player.”

It wasn’t the first outburst from Johnson, who isn’t known as the most gentlemanly player in the league. After he failed to register a single basket in the fourth quarter, he took out his frustrations by sticking out his foot and tripping Ham and Kim Dong-woo as they walked back to their bench during a time out.

Both benches cleared, but the conflict stopped there.

The temperamental Johnson has a history of instigating fights, with several incidents this season alone. He gave the finger to a player from an opposing team at the end of the Feb. 11 game against ET Land Elephants and then tracked him down in the locker room, where there was a verbal dispute.

Johnson was fined four million won ($3,572) for the incident and warned that punishments would get tougher in the future.

KBL officials can either fine or suspend the player. But league officials have hinted that a suspension is unlikely, considering that the incident took place during the championship series.

The University of Oregon alumnus was back to his usual emotional game Wednesday night. Johnson was KCC’s top-scoring forward, with 22 points and six rebounds.

With Ha already out of the lineup, it will be a big blow to KCC if Johnson is suspended for game five.