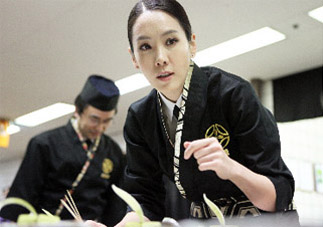 Jang-eun (Kim Jeong-eun) competes with a friend to make the best kimchi dish in “Kimchi War.” Provided by Lotte Entertainment

All the ingredients were there for “Le Grand Chef 2: Kimchi War” - capable actors, enticing subject matter - everything it needed to be an accomplished food flick along the lines of “Eat Drink Man Woman” or “Big Night.”

The film brings Korea’s favorite side dish to the forefront and fuses in themes about maternal love and family.

It comes out at a very opportune time, when the government’s push to globalize Korean cuisine is at its height.

But while I always found kimchi to be one of the most complex and intriguing dishes I’ve encountered, the movie was far from it.

Jang-eun (Kim Jeong-eun) is a famous fusion food chef who leaves her home in Korea for 10 years to make it big in Japan.

That puts Jang-eun on a collision course with childhood friend Seong-chan (Jin Gu), who was taken in by Jang-eun’s family when his deaf and mute mom could no longer take care of him.

Both Jang-eun and Seong-chan, who makes a living selling vegetables off of a van, have extraordinary cooking skills, but the battle over Chunhyanggak pits them against each other in a nationally-publicized contest to make the best kimchi dish ever - Seong-chan fighting to save the restaurant, and Jang-eun to shut it down.

The movie was written by the creator of the popular comic book series “Sikgaek,” which served as the basis for the unrelated first film, and I understand that as such, it is meant to take place in a sort of exaggerated reality.

Regardless, Kimchi War’s plot gets tangled up in a retrogressive view about motherhood that left me cold and even a bit offended.

Towards the end of the film, Seong-chan’s stepfather compares salt to mothers. He says that all mothers are like salt in that they silently carry out their duties and then disappear into the food - in this metaphor, referring to their children.

Though full of generalizations about motherhood, the movie never touches upon the concept of parenthood. This attitude makes it seem like a stuffy old fable, detached from the problems of the modern family.

I’ve often thought of kimchi as sort of the underdog of Asian cuisine. It is an acquired taste - one that doesn’t grasp you or repel you at first, but rather taps at your taste buds over time with elaborate flavors. As a fermented veggie fan, I was truly rooting for this film.

But in the end I realized that, just like the government push to globalize Korean food (whatever that means), Kimchi War didn’t do justice to the product it was promoting, instead seeming forced and unnatural.