Jeong-min (Kim Dong-wuk) is a detective, but not a diligent one, in a town where a serial killer is still at large. Being ignored by both his boss and mother, Jeong-min decides to solve the case to keep his position as a detective and a son intact.

His plan to catch the criminal, however, is always interrupted by his competitor Yeong-seok, who has been idle for years. Appearing to crime scenes earlier than other police officers, finding fault with everything Jeong-min does, Yeong-seok is a thorn in Jeong-min’s side and also looks suspicious.

Then one day, Yeong-seok’s daughter Ha-rin (Shim Eun-kyeong) reports her father as the case’s prime suspect. 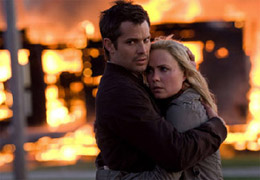 When a biochemical warfare virus “Trixie,” which either kills its victims outright or drives them hopelessly insane, spreads rapidly in Ogden Marsh, Iowa, the town is ruined in a moment. Sheriff David Dutton (Timothy Olyphant), his pregnant wife, Judy Dutton (Radha Mitchell), and two other unaffected townspeople band together in a fight for survival and try to escape.

Noticing the virus’s spread, the government sends the military to the town to quarantine the area. The military corrals the infected citizens, including David and the other survivors, into the local high school while the government figures out what to do.

Meanwhile, the virus spreads quickly and begins to threaten the world.

Alice (Brittany Murphy), an unstable writer recovering from a mental collapse, retreats to an abandoned Victorian house to convalesce and to focus on finishing a screenplay in time to meet her looming deadline.

Shortly after her arrival, she hears strange, mysterious sounds and sees apparitions.

Her curiosity leads her to begin exploring the mysterious home, and she finds a shoe box filled with videotapes hidden away in the attic. Alice becomes intrigued as she watches her discovery, but the terrifying secret they contain reveals something about her dark past.

Beth (Kristen Bell) is a hardworking New Yorker who is completely unlucky in love. Her last boyfriend left her because she puts her work above him. When she goes on a whirlwind trip to Rome to attend her sister’s impromptu wedding, she meets a guy named Nick (Josh Duhamel), but upon seeing him with another woman she goes to the fountain of love.

After impulsively stealing some of the coins thrown into the fountain, she sees her luck start to change. When she gets back to New York, four men come on to her, and Nick starts calling her to ask her out. She later hears about the fountain’s curse and must find some way to break it so she can find her true love. 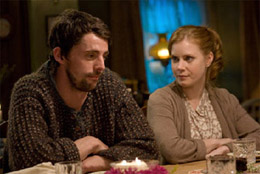 On their fourth anniversary, Anna Brady (Amy Adams) is expecting a proposal from her boyfriend Jeremy (Adam Scott), but he’s gone to Ireland on business. After hearing of the Irish tradition that says a man must accept a proposal made on Leap Day, Feb. 29, Anna goes to Dublin to make the proposal herself. She faces a major setback, however, when bad weather threatens to derail her trip so she asks Declan (Matthew Goode), a native of Ireland, for help. Her long journey just might result in her getting engaged, but she will have to choose the man.

Written and directed by Christophe Honore, this film unfolds with fantastic musical scenes. Ismael Benoliel (Louis Garrel) and his girlfriend Julie Pommeraye (Ludivine Sagnier) live together. When Julie invites Ismael’s friend Alice (Clotilde Hesme) into their relationship, the three of them share some mixed emotions as they walk, talk, party and sleep together. Julie’s unexpected death sends Ismael into despair, until he unexpectedly falls in love with someone else.

Popular music critic Seong-hee (Ji Jin-hee) drops the news that he is going to divorce his wife during a live radio show and escapes to Gangneung with his old friend Dong-min (Yang Ik-joon). The next morning, Seong-hee tries to call his wife, but doesn’t get through. Feeling guilty, he returns to Seoul to discover a letter from his wife saying she has left him. But in an ironic twist, he learns that she wrote the letter the day before the radio show and he ends up feeling betrayed, irregardless of what he did the day before.