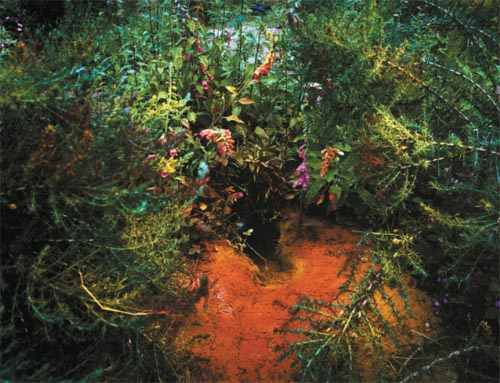 Ask people to think about fine arts, and most of them will picture neo-Classical sculptures or Impressionist paintings - not photographs. But more and more photo exhibitions are filling art galleries here and abroad in recent years, reflecting the medium’s rising public reputation.

This month, several photo exhibitions with very different atmospheres compete for the eyes of Korea’s art fans. They include a large-scale retrospective of Steve McCurry, the eminent American photojournalist best known for his “Afghan Girl,” which appeared in National Geographic magazine in 1985; the first solo exhibition by Darren Almond, an English artist who was short-listed for the 2005 Turner Prize; and an event by a group of six Korean photographers in their late 30s with distinct color palettes. The first two exhibits take place in Seoul, while the latter runs in Cheonan, South Chungcheong.

The exhibition “Unguarded Moment” at the Sejong Center for the Performing Arts in central Seoul includes about 100 pieces by McCurry, who is a member of the Magnum Photos collective and the winner of many honors including the Robert Capa Gold Medal for Best Photographic Reporting from Abroad and several World Press Photo Awards.

Most of the photos at this exhibit were taken in India and other Asian countries, including war zones in Afghanistan and Iraq. 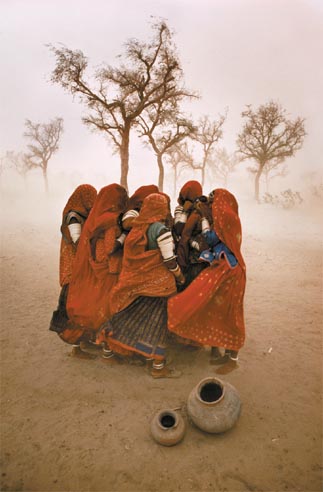 McCurry said at a press conference at the Park Hyatt Seoul near Samseong Station in southern Seoul on Wednesday that he likes Asian cultures, which have inspired and influenced other parts of the world. In particular, “Asia has one foot in the past and one foot in the future,” which he finds charming.

“Afghan Girl” is also on display. McCurry said in that photo he tried to capture the “ambiguity, haunted quality, beauty and complicated range of emotions” of the refugee girl, and that also seemed to appeal to viewers.

The portrait, carried on the June 1985 cover of National Geographic, is the most recognized photograph in the history of the magazine, with fear and expectation swirled together in the girl’s haunting eyes.

“Through their strong colors and exquisite composition, [McCurry’s] photographic masterpieces reflect human conditions and joy, anger, sorrow and pleasure in their most natural state,” said Urban Art, which hosts the exhibition, in a statement. “This distinguishes his works from photographs that are focused either on ‘art’ or ‘documentary’.”

“Through this exhibition, we will break the prejudice that he is only a documentary photographer,” said Park Myung-sook, president of Urban Art, at the press conference. “The viewers will rediscover him as a fine art photographer.”

McCurry argued that even that was a false distinction. “To label photographs, saying ‘this is documentary’ and ‘this is fine art,’ I think that is kind of bogus or false,” McCurry told the reporters at the conference, giving the example of Irving Penn, who focused on fashion photography and worked for Vogue magazine but inspired many fine art photographers.

“Dust Storm,” taken in Rajasthan, India, in 1983 looks like a beautiful Symbolist painting, the blurred figures of exotic red colors in the yellowish foggy air exuding a dreamy mood - ironic in the middle of a brutal, destructive sandstorm. 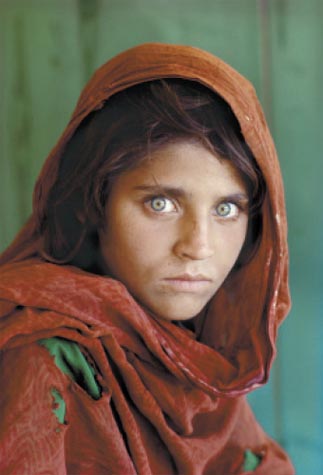 “Afghan Girl,” Steve McCurry’s most famous photograph, appeared on the cover of National Geographic in 1985. Provided by Urban Art

McCurry wrote about the photo on his blog.

“As we drove down the road, we saw a dust storm grow - a typical event before the monsoon breaks. For miles it built into a huge frightening wall of dust, moving across the landscape like a tidal wave, eventually enveloping us like a thick fog.

“Where we stopped, women and children worked on the road - something they are driven to do when the crops fail - now barely able to stand in the fierce wind, clustered together to shield themselves from the sand and dust. I tried to make pictures. In the strange dark-orange light and howling wind, battered by sand and dust they sang and prayed. Life and death seemed to hang in a precarious balance.”

Looking at this photo is like peeling back layers of emotion: At first, the viewer simply feels the picturesque beauty of the photo, then there is sympathy for the people struggling for their lives and finally the realization of the paradoxical beauty of survival through hardship.

This is why McCurry has so many fans in Korea and worldwide. Many bloggers on Naver, the nation’s biggest Web portal, have already written about their expectations for the retrospective, calling themselves “McCurry wanna-bes.”

McCurry’s works focus on what Henri Cartier-Bresson (1908-2004), regarded as the father of modern photojournalism, called “the decisive moment,” capture in “a composition or an expression that life itself offers you.” 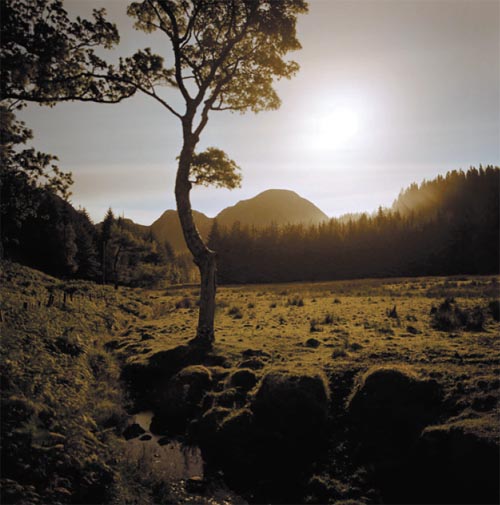 In contrast Darren Almond’s works in various media, including photography and film, are carefully prepared. His calm and contemplative landscape photographs, including the “Fullmoon” series taken with an exposure of between 15 minutes and several hours on a night with a full moon, populate an exhibition underway at the PKM Trinity Gallery in Cheongdam-dong, southern Seoul.

In the Fullmoon photos, it’s at first difficult to tell whether it’s day or night, so mysterious is the glow in the sky.

Almond is frequently considered one of the so-called YBA, or “young British artists,” since he participated in the “Sensation” exhibition at the Royal Academy of Art in London in 1997 with Damien Hirst and others.

But the artist himself does not think of himself that way, according to the gallery. Indeed, Almond’s work has little in common with the YBA’s sensational and controversial style, instead hearkening back to 19th-century Romantic landscape painters such as German Romantic painter Caspar David Friedrich (1774-1840), whose work also featured meditative and symbolic landscapes under mystic lighting.

The exhibition also includes some of Almond’s video art, such as “Marathon Monk,” which features a Japanese monk running through the forest as part of his training, and “Bearing,” featuring a miner harvesting sulfur chunks in a volcano in Java, Indonesia, without safety equipment. These films are actually more similar to McCurry’s photographs.