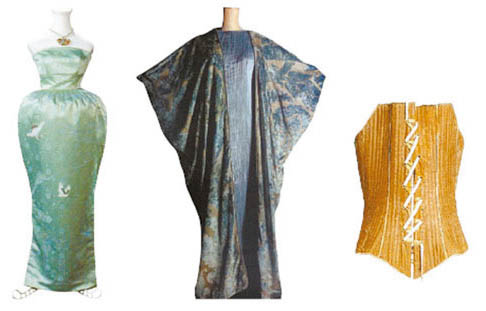 Dress “Celadon”, Choi Kyung-Ja, 1962. A piece submitted in the first international fashion show held in Korea in 1962. Building on the design concept of hanbok rainbow skirts, the wavy lines of the Goryeo celadon are accentuated. The crane was painted by artist Lee Se-duk.

Choi Kyung-ja is a legendary figure in Korean fashion. In 1937 she established Eun Jwa Ok, the first Korean couture house, and in the following year, the Hamheung Professional Dressmaking Institute. This is when her eldest daughter, Shin Hei-soon, was born. Choi also launched the first Korean charm school and fashion magazine, “Costume.”

Shin, 72, director of the Kookje Fashion School, was the first Korean student to enter the Fashion Institute of Technology, a prestigious school affiliated with the State University of New York college of art and design. When she returned to Korea in 1971, she began to win acclaim as a designer.

Following in her mother’s footsteps, Shin has devoted herself to fostering a new generation of young designers.

Although Shin’s mother beat her to being the “first” in almost every fashion-related area, the exception is Shin’s creation of the Korea Museum of Modern Costume.

“I practically lived in fashion museums when I was a student at FIT,” Shin said. “They receive donations from brands like Chanel, Versace, Dior and Nina Ricci once every five years. This made me certain that Korea, too, was in need of a costume museum. It has been said that many pieces created by Korean designers are copies. But there’s no alternative when one hasn’t seen the designs created in the past. Looking at the history of fashion helps to inspire creativity.”

Shin’s mother managed to preserve a number of items of clothing, and these were the first to be installed into the collection of the Korea Museum of Modern Costume, which opened in Namsan-dong on Dec. 24, 1993.

Shin also received donations from her first student, Lee Sang-bong, and numerous other designers such as Shin Jang-kyoung, Lee Chul-woo and Ahn Yoon-jung.

The museum also contains clothes that are emblematic of Korea’s fashion design history. These include a miniskirt worn by Yoon Bok-hee in 1968 (designed by Choi Kyung-ja), the dress donned by Miss Korea Oh Hyun-joo in the 1959 Miss Universe competition (by Nora Noh), and the dress created by Lee Sang-bong in 2007.

The outfits of previous first ladies also form an integral part of the main collection. Some of the clothes hold historical significance, such as the gray suit worn by Francesca Donner, the wife of Korea’s first president, Syngman Rhee, and the azalea-colored suit First Lady Kwon Yang-suk wore when she visited North Korea with former President Roh Moo-hyun.

“It takes from six months to five years to get donations from former first ladies,” sighed Shin. “Lee Hee-ho sent a message that her donations were ready in just one week. Her clothes were packed in a hanji [Korean traditional paper] box, so that they would get enough air. There were even pictures of her wearing the clothes to show she actually wore them,” she said.

Kim Yong-hee, Shin’s eldest daughter, who is currently studying in Paris, sent her a collection of old European costumes.

With the combined efforts of the three generations of women, Shin collected 2,000 pieces.

It is no mean feat to store these articles of clothing. Shin makes use of the storage room in her in-laws’ house in Yesan, South Chungcheong. She talked about one heart-stopping moment when her new housekeeper swept the relics into a black garbage bag.

“If they were paintings, no one would think about throwing them away. But most people don’t hesitate to throw out tatty clothes,” Shin said.

Despite the wealth of carefully stored materials, the museum shut down for about five years. It had grown increasingly difficult to manage the facility due to the economic recession.

But thinking about the generosity of her friends and relatives, Shin could not simply give up. The museum’s collection was displayed in an exhibition showcasing 100 years of Korean fashion at Kyungwoon Museum at Kyunggi Girls’ High School in 2008, and Lotte Avenuel in 2009. Having survived ups and downs, the museum is scheduled to reopen on the 15th in Chungsin-dong, Jongno in central Seoul. On the day of the interview, director Shin was wearing work gloves and organizing items in the gallery.

“It’s impossible to abandon the museum because there are so many people who gave donations,” Shin said. “This museum was created with the help of my forward-thinking mother and countless designers. The entire fashion industry should step forward to aid the next generation of fashion designers.”